Leinster made it six wins from six in the Guinness Pro14 after a facile win over Connacht at the Sportsground.

The visitors dominated the first-half, securing their fifth bonus point of the campaign well before the break en route to a 42-11 victory.

Both sides welcomed back internationals involved in the Rugby World Cup. Connacht included Jack Carty at 10, with Bundee Aki off the bench, while Leinster called upon Cian Healy, Luke McGrath and Andrew Porter in their XV. Rob Kearney and Rhys Ruddock also made the Leinster bench.

Here is your updated #LeinsterRugby 23-man squad for #CONvLEI following the news that Robbie Henshaw has withdrawn due to illness, with @jimmyobrien88 starting at 13. 👇 pic.twitter.com/a9peqn92NL

Connacht took an early lead when Carty converted a penalty after four minutes of play.

But Leinster weren't behind for long. Just three minutes later, Ireland prop Porter powered over the line as he drove his would-be tacklers back.

Ross Byrne added the extras to make it 7-3 after eight minutes of play. Aki then entered the fray as a temporary replacement for inside-centre Pete Robb. 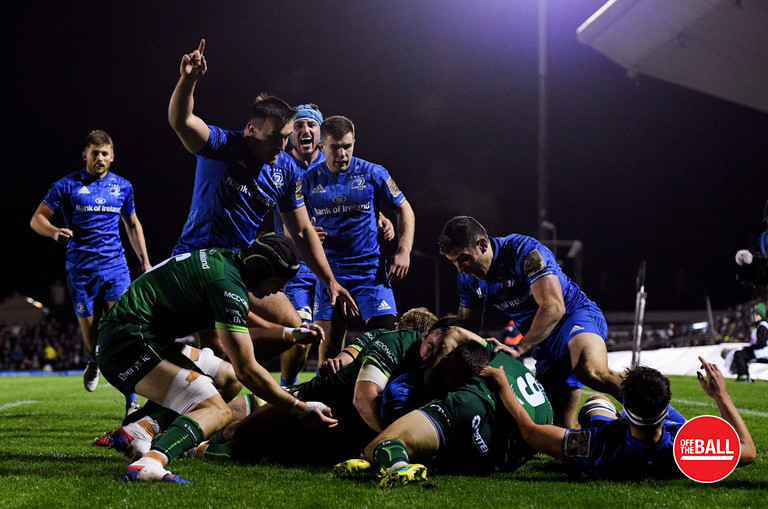 8 November 2019; Leinster players celebrate a try by Andrew Porter during the Guinness PRO14 Round 6 match between Connacht and Leinster at the Sportsground in Galway. Photo by Ramsey Cardy/Sportsfile

Ronan Kelleher crossed over this time with another Byrne conversion making it 14-3 and leaving the home side with a mini-mountain to climb.

Connacht won a penalty following a late hit on Carty after 16 minutes which resulted in the out-half departing to undergo a HIA. Darragh Leader converted to cut the deficit to eight points.

But Leinster got their third try on 21 minutes as Kelleher darted from another powerful maul to touch down and cap a Man of the Match performance. Byrne's third conversion from three had Leinster 21-6 clear.

Connacht's night got even worse with the match barely half an hour old as their opponents picked up their bonus point. Leinster's forwards drove at the line again and following a TMO confirmation, Porter's try was confirmed.

Byrne's previous points had all come from the boot. But on 33 minutes, he showed quick feet to evade Connacht's backs and crossed over for try No 5. He added a conversion to leave the scores at 35-6 and his own personal haul at 15 for the night.

Connacht had a mountain to climb. But they took an early chunk out of the Leinster lead on 48 minutes. Carty's excellent cross-field kick found wing Stephen Fitzgerald and he showed composure to run through and score the first try of the night for Andy Friend's side. But a missed conversion left Connacht trailing Leo Cullen's side by 24 points.

Leinster thought James Tracy had scored try No 6 seconds before the hour-mark. But the TMO ruled that out on review. Cullen introduced Kearney into the fray following that moment, while Ruddock came on for the second time.

Try No 6 did come on 67 minutes however. James Lowe turned on the afterburners as he raced clear after an intercept to touch down. Leinster were now 42-11 clear and held on to that huge advantage until the final whistle.