Bohemians showed title winning form heading into the Dublin derby but their latest defeat in the fixture may have ended their hopes of clinching it.

Having held the Indian sign over the Hoops for an incredible eight matches, the Gypsies curse has been well and truly broken by four defeats to their arch rivals in last four meetings, three of those being 1-0 Premier Division defeats.

On Saturday, Rovers boss Stephen Bradley showed his appreciation for the opposition's flying wingers by leaving Joey O'Brien out of the team and opting for a more mobile back three of Liam Scales and Lee Grace alongside former Bohs player Roberto Lopes and Bohemians manager Keith Long admitted after the game that it was the right call by his opposite number.

"It did [work] because obviously they kept a clean sheet. Liam came in and I think he did quite well," said Long who was left frustrated by his own team's performance.

"It's difficult because we know we're better than that. We can show a little bit more but that's easy to say now isn't it? We've lost the game, Shamrock Rovers have won one-nil. We didn't work their goalkeeper enough. [There was] half chances in the second-half, the ball flashing around the box. Maybe if we get on the end of that, but disappointed with the forty-five minutes we wasted there today."

The wingers in question, Danny Grant and Kris Twardek, have been in excellent form since the season restarted and were such a threat when getting behind the defences of St Patrick's Athletic, Finn Harps, Dundalk and even Fehérvár in the Europa League in recent games. 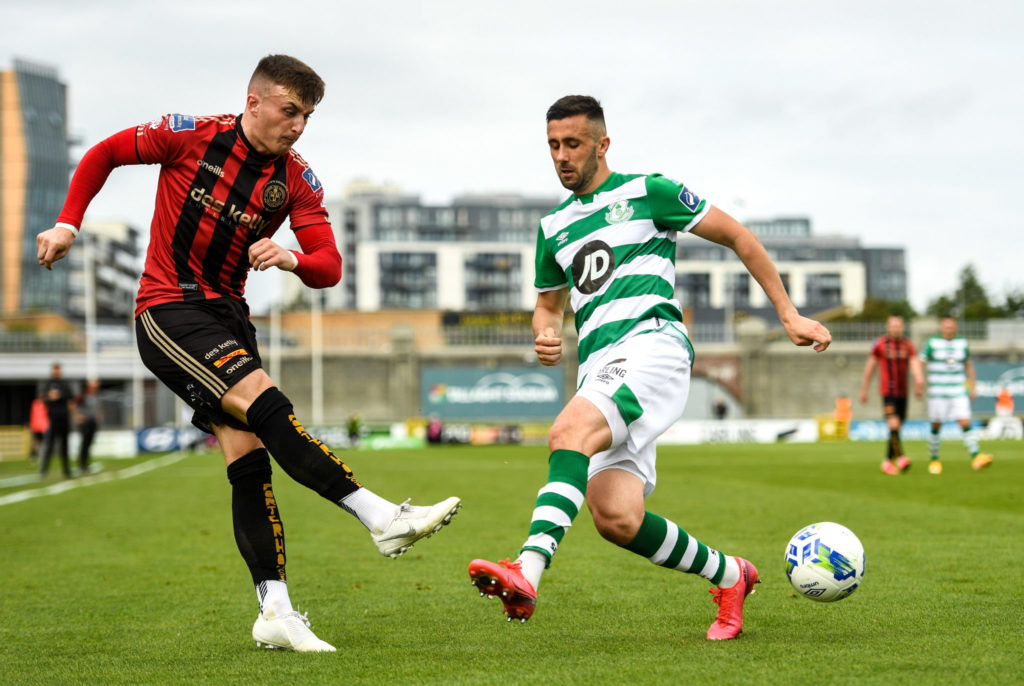 5 September 2020; Danny Grant of Bohemians in action against Danny Lafferty of Shamrock Rovers during the SSE Airtricity League Premier Division match between Shamrock Rovers and Bohemians at Tallaght Stadium in Dublin. Photo by Eóin Noonan/Sportsfile

That rarely happened at Tallaght Stadium on Saturday and on the one occasion in the first-half that Grant got his behind his marker, Danny Lafferty, before cutting the ball back from the byeline, Long's frustration in the technical area was clear to see as there was nobody ready to have a shot inside the box.

The ball trickled out of the opposition area to JJ Lunney who blasted over the bar and there were a handful of similar incidents in the second-half.

"It's disappointing that we couldn't get bodies forward and test Alan Mannus. Maybe get their wing backs facing the wrong goals and their backs down the wings. We didn't do that enough."

Rovers now top the table with a five point lead over the Phibsborough club but the Bohs boss didn't sound too deflated by how the table had changed after the loss.

"There's lots of football to be played. There's still eight games to go. Rovers are in the driving seat," said Long.

"It doesn't affect us hugely. It would have been great to come here and win or get a result. We haven't really been in the equation until we beat Dundalk so we'll have to reset.

"We'll have to get ready for next week. We have a tough game next week, Waterford were really good last night. They've got some good players and we've got to make sure we're ready for that and try and bounce back because the same three points are available next week."