Behind closed doors better than nothing says Leinster coach Cullen

Leinster head coach Leo Cullen says the province are open to playing games behind closed doors if they are asked.

Both the Guinness PRO14 and the Heineken Champions Cup are suspended as a result of the COVID-19 pandemic with no firm dates for a return.

Last week, Leinster's Head of Rugby Operations Guy Easterby claimed there was a "soft plan" in place for the province's players to start gradually returning to training.

Cullen admits they're unsure as to when they'll be back playing, but will be content to do so behind closed doors, "We don't have a full grasp of some of those conversations that are taking place", he told a video-conference.

"We'll just get on with that, if that is the arrangement. We'll go about preparing ourselves as best as we normally do.

"Obviously it will be a slightly different situation, if that was to take place. But we have all been involved in games, training games, pre-season games where there's not that same crowd atmosphere - obviously it takes away."

"It will be better than nothing, and obviously it allows us to get sport back up and running as well."

Cullen says the cross border nature of their competitions complicates matters further, when potential trips to France, Italy and South Africa remain on the cards, "Obviously there are challenges for the Guinness PRO14, and the same for the Heineken Champions Cup in terms of trying to complete those fixtures.

The number-8 suffered a fractured foot in the lead-in to last autumn’s Rugby World Cup.

The head coach says the squad have been keeping busy, even if they remain apart for the foreseeable future, "There's going to be other sports who will probably back up and running before us, so for us we're just trying to put a plan in place around the playing group.

"Even though it is remotely, there's a hell of a lot of work that the players can be doing from both a physical point of view and then there's some mental stimulation they can get as well from a tactical point of view."

Cullen concedes that with a situation that's changing on a daily basis the province will "work within whatever constraints we have to work within." 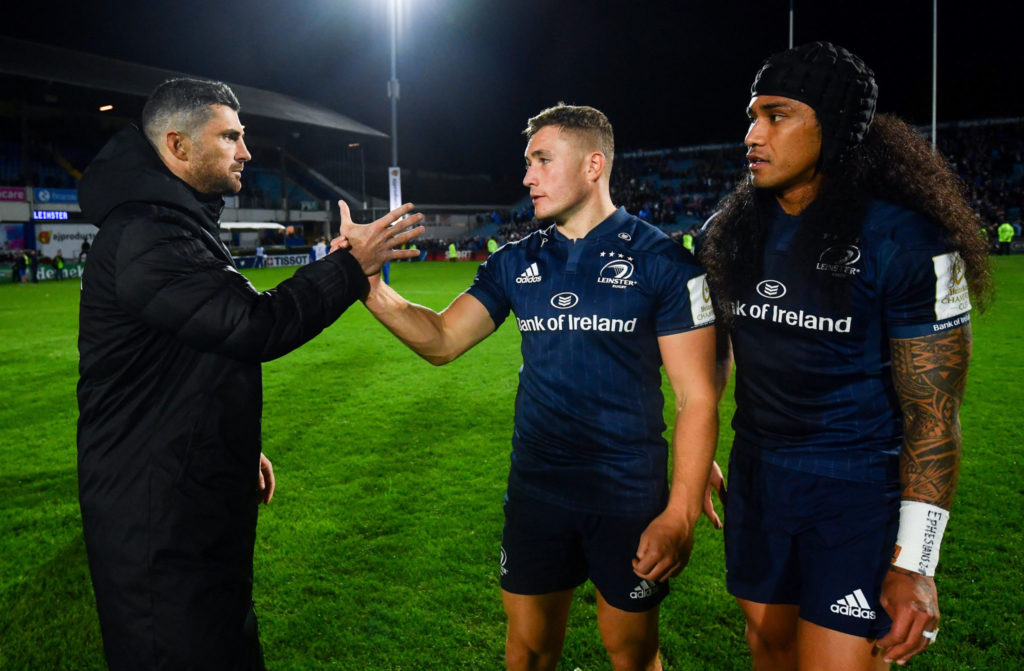 12 October 2018; Rob Kearney, left, Jordan Larmour, centre, and Joe Tomane of Leinster following their victory in the Heineken Champions Cup Pool 1 Round 1 match between Leinster and Wasps at the RDS Arena in Dublin. Photo by Ramsey Cardy/Sportsfile

A season that stretches into the summer will provide issues for the human resources department at Leinster.

Rob Kearney and former Wallaby back Joe Tomane are among those out of contract at the end of June.

What happens next with players in that situation is a "huge challenge" according to Cullen, "The contracting cycle runs to the end of June in Ireland so that creates problems straight away.

"Because if we're talking about getting ready to come back some time at the end of May, or middle of May, for this kind of 'pre-season window' and whether you're able to finish out the season in July or August with players who are off contract.

"There's going to be a good chunk of players that still haven't got themselves sorted with contract for next season.

"The players are open, they're very understanding."

While some may be in their final months as Leinster players, Cullen let slip that there will be little-to-no incomings this summer, "We don't have as much change as most other teams - we don't have players coming in, we've a very settled group for the most part.

"A lot of younger players will be getting promoted from the academy into our senior squad, and as is the case every year there are going to be a few players that will retire at the end of the season.

"It's clearly complicated, because we don't know what the end of the season is going to look like, but the players are understanding of the situation."