It's emerged Dublin city council was refused a government grant of €6.6 million earlier this year to build it's controversial white-water rafting centre.

Councillors were told more than half of the €22.8 million euro bill for the docklands project would be covered by state grants when they approved the plan late last year.

However an application for money under a sports infrastructure fund was turned down in January.

The Journal.ie reports a separate application for funds was made in 2018, which was also rejected.

It comes as the council unveiled plans for a €15 million sea pool on the River Liffey last week. 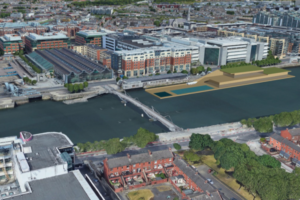 The local authority wants to build the centre close to the proposed rafting facility.

Temperatures To Reach Lows Of -5 Degrees In Ireland Tonight