Coastal flooding caused by climate change is predicted to impact more than 23,000 homes and businesses in Dublin by 2050.

The analysis, by data and mapping experts Gamma Location Intelligence, is based on the predicted 2 degree rise in temperature. 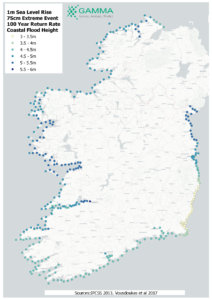 The analysis showed that the capital will be the most affected county in terms of the number of addresses expected to be impacted by extreme coastal water levels, with some 23,435 properties at risk.

This translates as 21,513 residential addresses and 1,922 commercial properties.

Nationally more than 70,000 Irish addresses will be at heightened risk of coastal flooding by 2050 as a result of climate change. Some 88% of these addresses are residential.

It is estimated that the cost of climate change, influenced by sea level rise, on property in Ireland will be around €2 billion.

"With increasing global temperatures, sea levels are rising which means flooding will become more commonplace. This will have a major impact on many Irish counties, particularly along the coast, and a significant number of properties are set to be affected – unless carbon dioxide emissions are reduced which will help to delay the process."

Man Charged With Incitement To Hatred