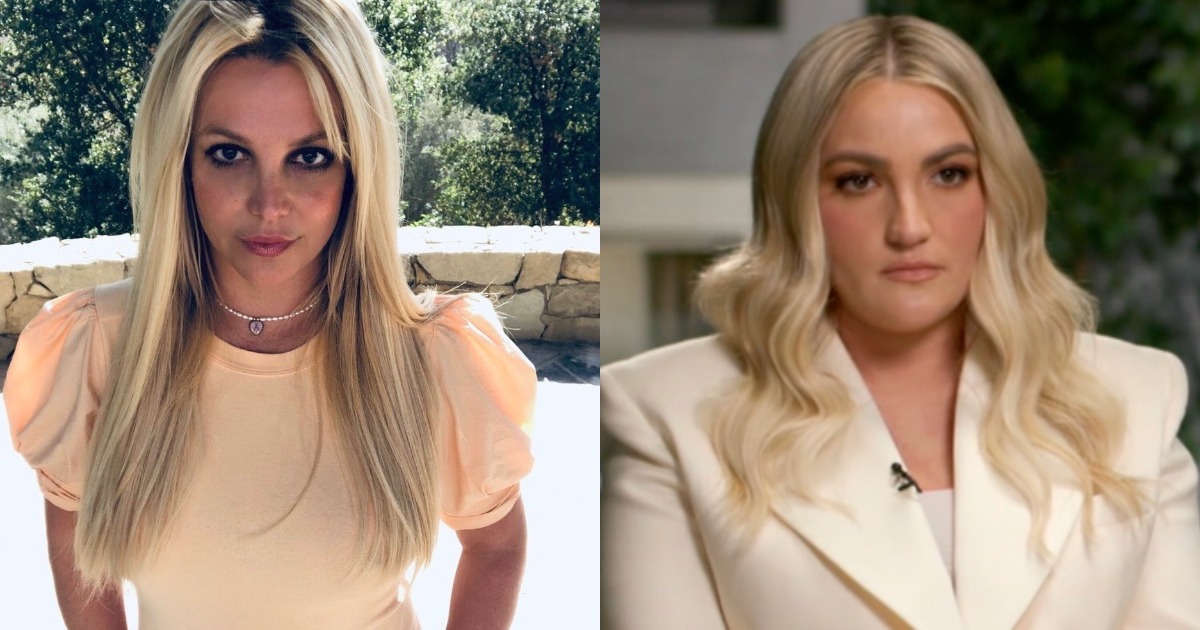 Taking to her Instagram Stories over the weekend, Spears wrote: “Britney — Just call me, I have attempted many times to speak to you directly and handle this privately like sisters should, but you still choose to do everything on a public platform.

“In the meantime, please stop continuing the narrative that I haven’t been there for you or that I’m making things up.”

She continued: “I’m happy to share how many times I’ve reached out to you, supported you and tried to help you. This is embarrassing and has to stop. Love you @britneyspears.” 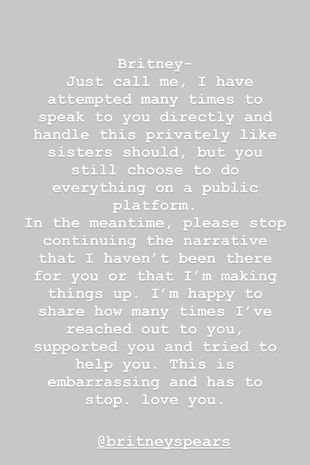 The former Zoey 101 star discussed her “complicated” relationship with Britney last week, as she promoted her new memoir Things I Should Have Said.

Spears also said she “went out of her way” to help Britney end her controversial conservatorship, despite the singer’s claims her family never helped her.

Following the interview, Britney slammed her sister on Twitter, accusing her of selling her book “at my expense”.

"She never had to work for anything. Everything was always given to her !!!!" she wrote.

"I always was the bigger person. They all got to DO IT and PLAY ME and I always sat there and took it. But see, now it's a joke … the last thing I would ever do is ask for what was just given to her !!!

"So yes, they did ruin my dreams... My family loves to pull me down and hurt me always so I am disgusted with them."

Spears later responded to the Toxic singer's comments in a statement shared on Instagram.

She wrote: “Last thing I want to be doing is this, but here we are… It’s hard to see these posts, as I know the world also feels. I just wish her well.

“Brit, I am always here, you know behind the scenes I have always been here. It’s become exhausting when conversations, and texts we have in private don’t match what you post on social media.

“I know you’re going through a lot and I never want to diminish that, but I also can’t diminish myself.”

The 30-year-old continued: “Quite frankly, the things being said are absolutely not the truth, and I have to clarify that, because now it’s getting harder for me to rationalize to my oldest daughter why our family continues to get death threats, as a result of their aunt’s vague and accusatory posts, especially when we know she could tell the truth, and put an end to all of it in one second if she wanted to.

“Sadly, after a lifetime of staying silent, I have come to realize this isn’t going to be a reality, and I may have to set the record straight myself in order to protect mine and my family’s well being.

“That being said, I hate to burst my sister’s bubble, but my book is not about her. I can’t help that I was born a Spears too, and that some of my experiences involve my sister.”

“I’ve worked hard since before I was even a teenager, and I’ve built my career in spite of just being someone’s little sister,” she wrote.

“There are no sides, and I don’t want drama, but I’m speaking my truth to heal my traumas, so I can close this chapter and move forward, and I wish my sister could do the same.”

“No matter what comes, I will always love my big sister, and be here for her. It’s time to put an end to the unhealthy chaos that has controlled my life for so long,” Jamie Lynn added. 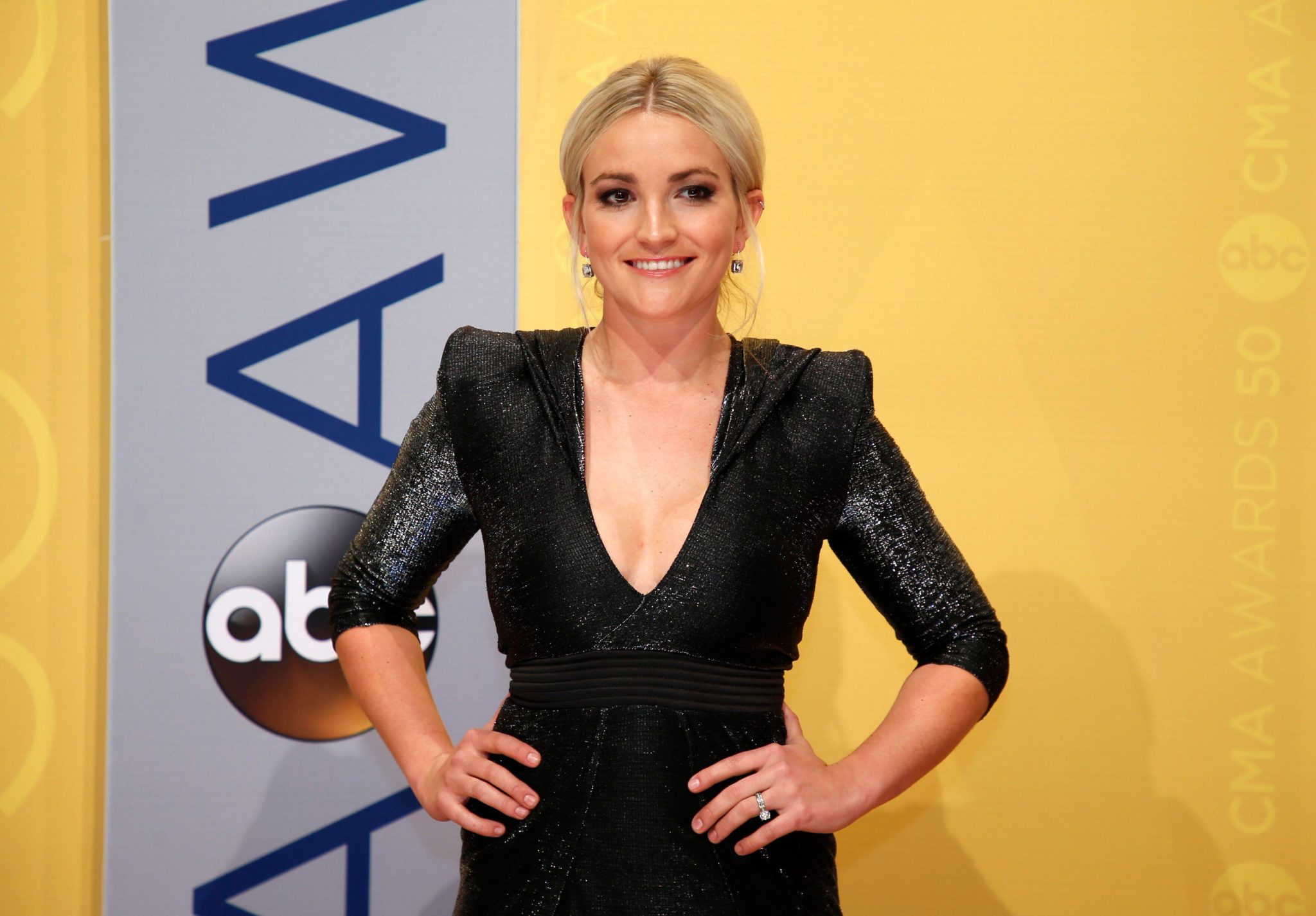 In a follow up statement, Britney explained that she loved her sister "unconditionally", while calling their ongoing feud "tacky".

"Jamie Lynn... I don't think your book is about me at all... I said some harsh things because you obviously hurt me by the things you are making up about me!!!" Britney wrote. 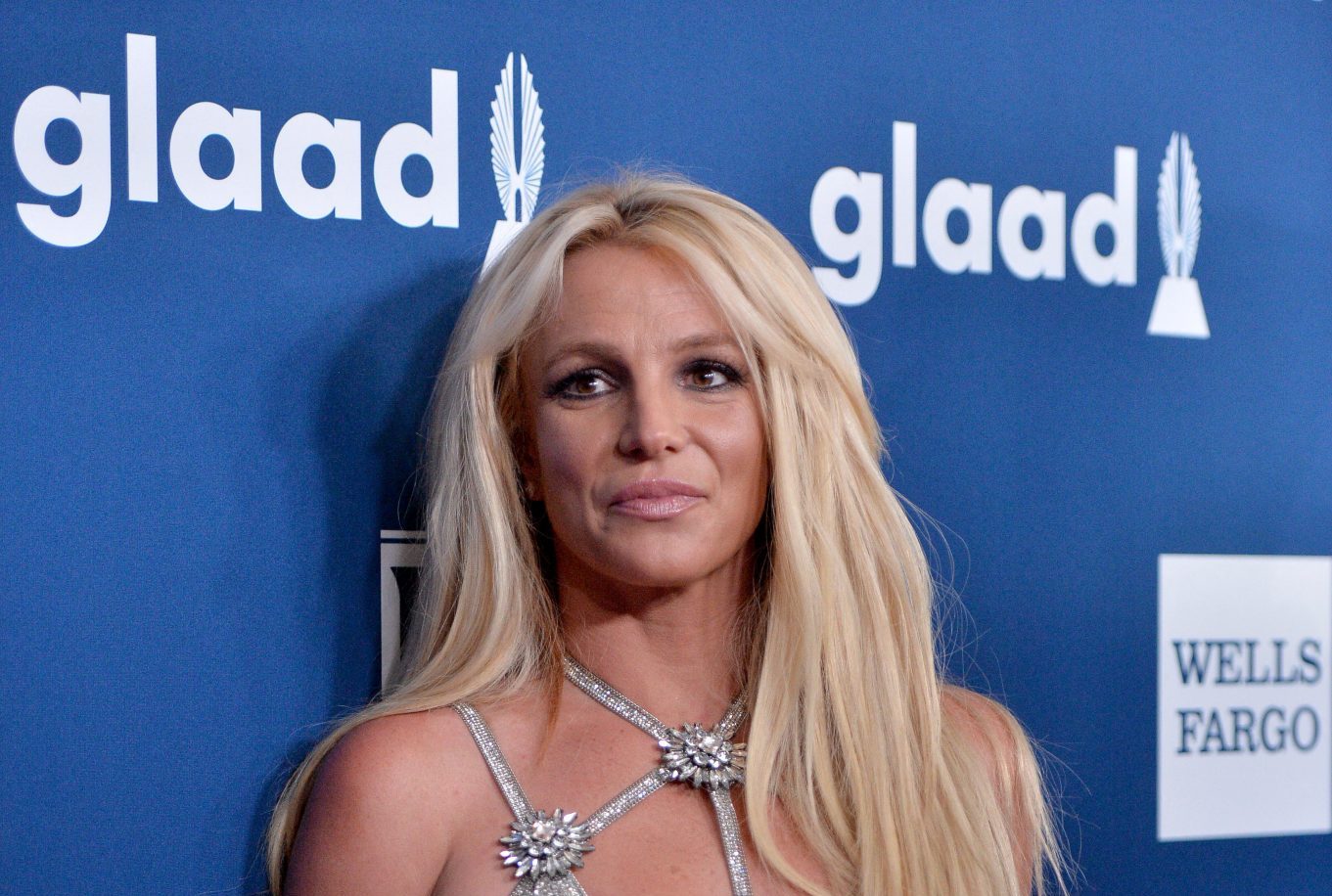 "[But] it doesn't make sense at all to me what you are saying!!! I know you worked hard for the life you have and you have done amazing!!!!

"But I think we would both have to agree to the fact that the family has never been remotely as hard on you as they have been on me!!! What Dad did to me, they don't even do that to criminals... so for you to sit back and act completely aloof to what has happened to me is honestly insane to me!!!"

"Do you know anybody who worked as hard as I did and the hours I put in during those 13 years only to be sent away for 4 months for no reason at all??? And I won't even mention what was done to me in that place!!!" she continued, referring to her stay at a psychiatric facility during her conservatorship.

"All I know is I love you unconditionally!!!" she wrote to Jamie Lynn. "So go ahead and say whatever you want... it's so tacky for a family to fight publicly like this!!! You say you love me... yet your loyalty is still with the people that hurt me the most!!!"