Ireland showed some improvement tonight from the October qualifiers. But ultimately it wasn't enough against Denmark at the Aviva Stadium as Mick McCarthy's side were consigned to the Euro 2020 playoffs. Here are our Irish Player Ratings from tonight.

Didn't have many shots to deal with in the first-half. But as goalkeeper, he obviously had a key role in trying to play out from the back. His short passes were fine but more low-percentage distribution was more mixed.

Normally plays further forward in a 3-5-2 for Wolves. But more subdued as a more traditional right-back in the first-half, with Stevens more involved on the opposite flank. Browne's positioning on the right ahead of him may have been made to encourage Doherty's forward raids. But there wasn't much evidence of that in the first '45, although he wasn't poor by any means. He did his defensive work well. Showed more of what he was capable of on 57 minutes when he marauded forwarded before a clever cross-field pass to James McClean. Between himself and Ciaran Clark, they stopped a dangerous moment as Kasper Dolberg made his way into the box. However, it was Doherty who fell asleep for a second at the far post to allow Martin Braithwaite to make the run that led to the Danish striker's goal. It was a moment that proved costly. He redeemed himself somewhat when he headed in at the far post on 85 minutes.

Captained the Boys in Green on an all-important night. Ireland, somewhat surprisingly based on recent tradition, played out from the back. The Brighton centre-back showed for the ball in the first-half as Mick McCarthy's side looked to build more constructively than usual. Made a vital block on a Christian Eriksen half-volley on 25 minutes. His own individual performance was very good. And he wasn't completely at fault for Martin Braithwaite's goal as he was covering another Danish forward. 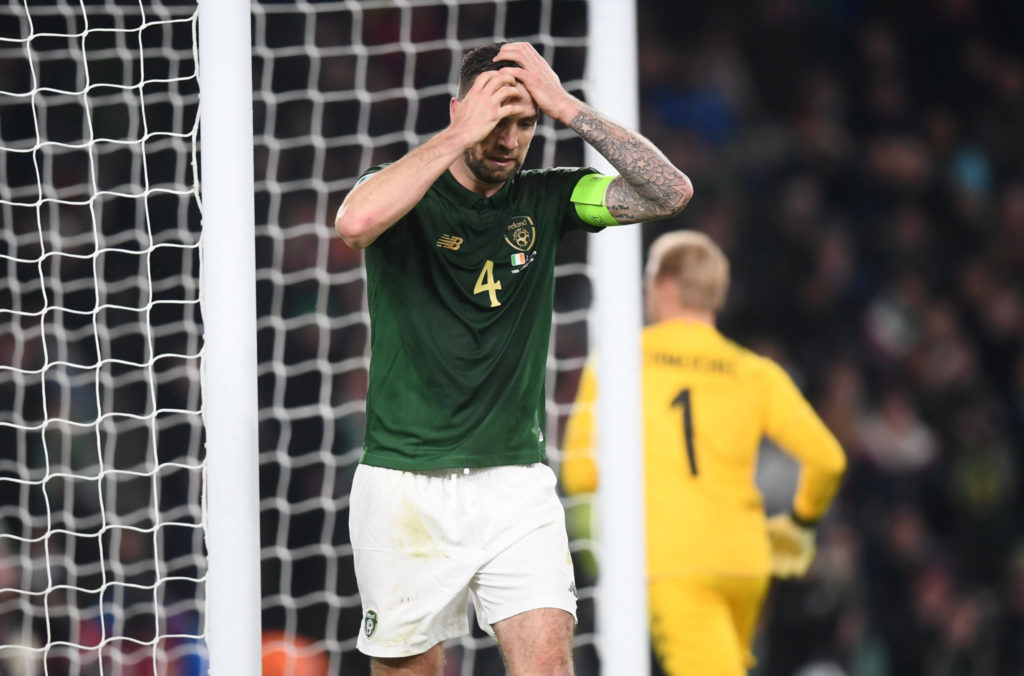 Like Duffy, Egan looked to start play from the back-line. Solid and dependable alongside Duffy in the opening half. But unfortunately he was withdrawn at half-time due to a calf injury.

The Sheffield United left-back started the match in lively fashion in the early seconds. A reasonable showing in his left-back brief. Also set up the late equaliser.

The midfielder was another option for Randolph to play out from the back. But generally, it was from midfield onwards that play seemed to run out of steam creatively in the first-half. Booked on 54 minutes somewhat harshly after trying to win the ball back - and getting to it - after giving the ball away.

He came off with 10 minutes to go with Ireland an equaliser.

Came close seven minutes before the break with a half-volley just beyond the post with Schmeichel seemingly beaten. He had an interesting role as a central midfielder playing from the right side. 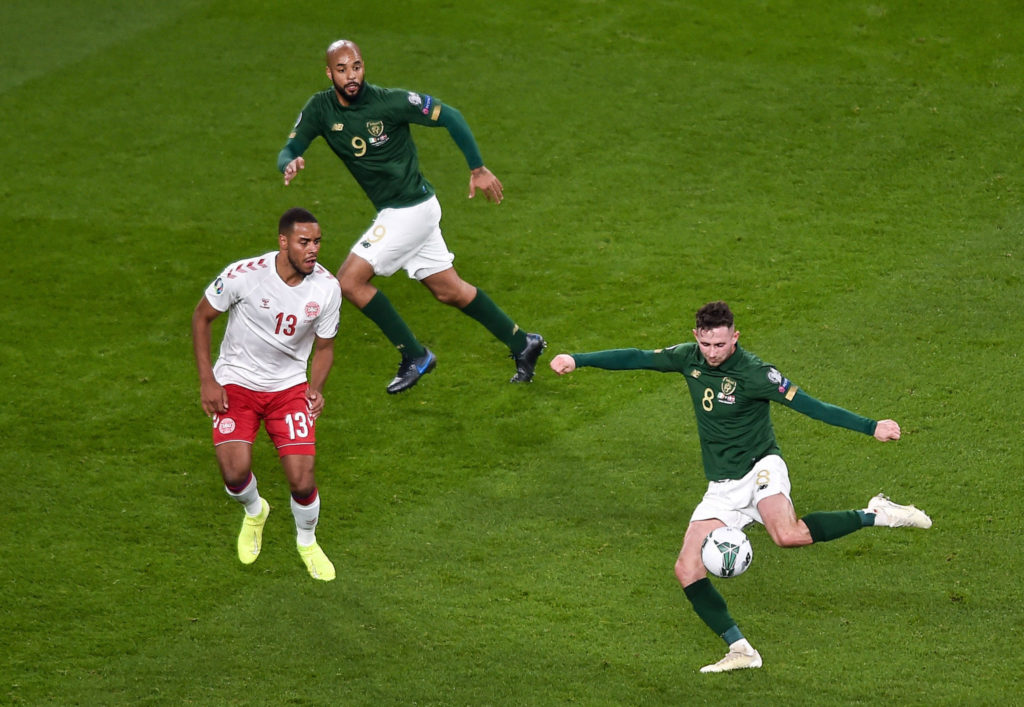 The quietest of the midfield five that started the game in the first-half. Played in a more advanced position which he may feel is not his best midfield role. Made more of an impact in the second half, for example, winning a corner in the right channel after the hour mark.

The Aston Villa midfielder might have done a little better on 33 minutes when the ball broke to him. But his low shot was straight at Kasper Schmeichel. Lost the ball cheaply on 49 minutes leading to a Danish break that, fortunately for Ireland, came to nothing. Came off on 67 minutes as McCarthy sought more invention through Callum Robinson.

High energy as per usual from the winger. He was particularly busy in the first 20 minutes, before the emphasis of the game moved away from the Irish left. He did well to win Ireland a corner just before half-time. 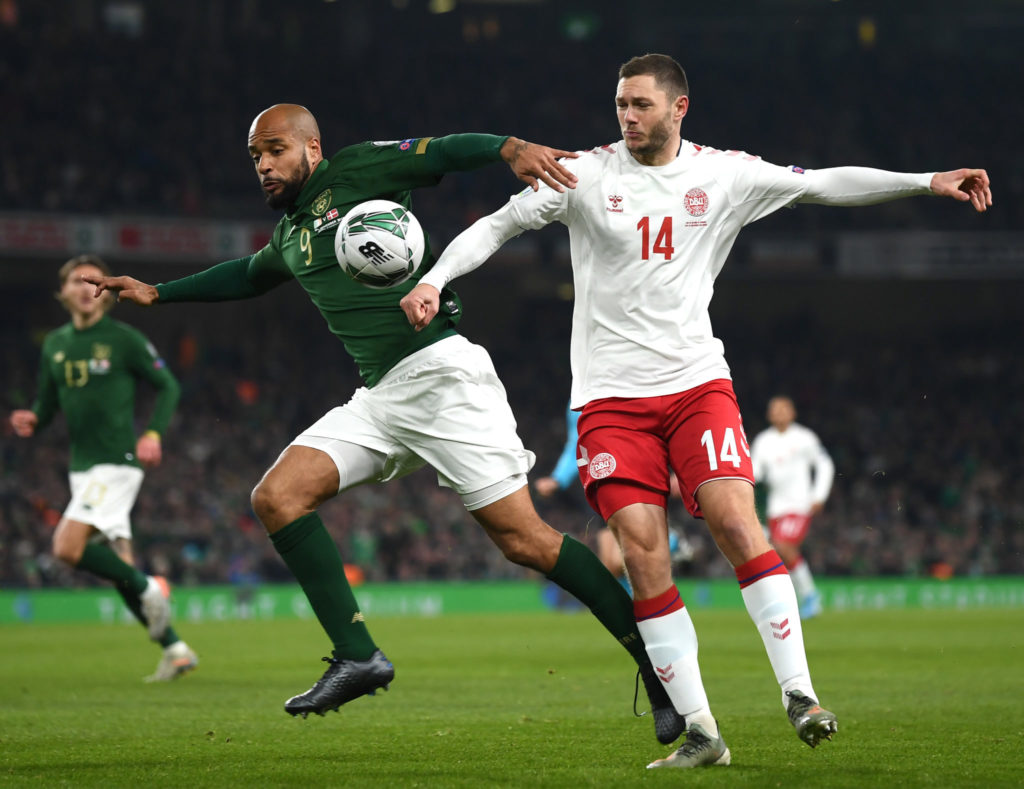 As expected, he was a willing lone runner up-front. Did well in holding up play on 33 minutes, for example, in a passage of play that led to Hourihane's shot. Attempted an ambitious effort from 30 yards shortly before half-time which didn't find its target. Put a snapshot over on 66 minutes as he made a nuisance of himself for the Danish defence. Had other efforts that didn't test Schmeichel.

Callum Robinson (67'): The Sheffield United forward replaced Hourihane as the game ticked towards the crucial period.

Sean Maguire (81'): Came on for Glenn Whelan as Ireland chased an equaliser.

Agree/disagree with our Player Ratings? Let us know your thoughts on Twitter.