The Republic of Ireland face an uphill task to qualify for the women's European Championships following a 1-0 defeat to Ukraine in Group I this evening.

A draw or win in Kiev would have secured a playoff place for Vera Pauw's team but Ukraine have the opportunity to leapfrog Ireland by winning their final two matches in the group.

"I'm absolutely gutted for the players, it's a huge loss" former Wexford Youths and Galway player and OTB analyst Ruth Fahy said of the loss on this evening's Off The Ball.

"It was such a frustrating 90 minutes. The game started so brightly and I was so optimistic in the opening 15-20 minutes, I thought their link-up play was so good and they were doing everything super quick.

"They looked really bright and technically so much better than Ukraine, they did throughout the whole game. I thought Katie McCabe, Rianna Jarrett and Denise O'Sullivan at the start looked on it, the whole team looking on it.

"I was watching the game with my family and my dad was ultimately right when he said that 'if they don't take these chances it'll served to cost them'.

"Katie McCabe had a free-kick which rattled the crossbar and Ukraine go on to get a goal, McCabe then hits the crossbar again from a penalty and you get the feeling then that it could be one of those nights."

Own goal and missed chances

Ukraine were gifted what proved to be the match-winning goal in the 25th minute when Aine O'Gorman's back-pass ended up going past a wrong-footed Ireland goalkeeper Courtney Brosnan.

"It's a goalking howler," Fahy said of Brosnan's error. "I think Aine actually does quite well, she's maybe put a little bit too much pace on it, obviously you'd like to direct a back pass away from your goal but it wasn't so.

"Courtney's positioning was poor. She plays at a level where she should be quick enough to check back and she'll know that herself."

"After that I got a feeling in the pit of my stomach that maybe this won't go the way that we'd hoped.

"Katie had been unlucky earlier to see her free-kick also hit the woodwork and Rianna had another chance, she just didn't make a clean connection after a beautiful ball around the corner, she did really to take away a defender and just didn't get the right connection and it was cleared off the line.

"Apart from the goal I don't remember Ukraine testing Courtney Brosnan. They created nothing, they didn't look they had any potential to do anything and what they was decide to be combative, physical, aggressive, break up the Irish play and that's exactly what they did. 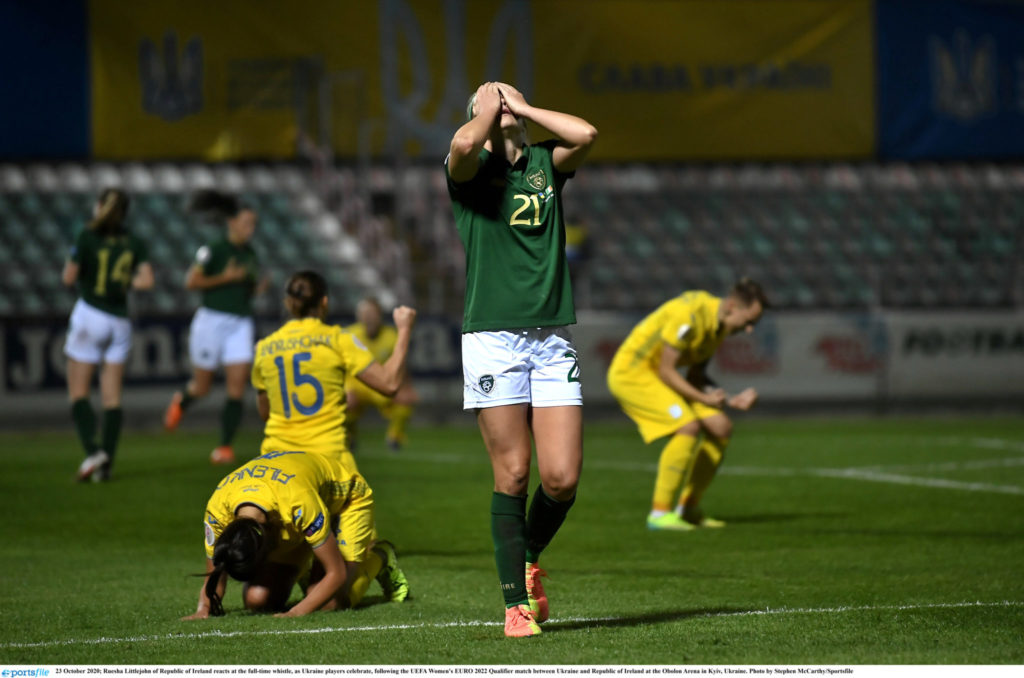 Fahey feels that waiting until the 85th minute to make changes was an error and that manager Vera Pauw should have switched things up earlier in the second-half when they were chasing an equaliser.

"It's just so frustrating to watch, the hardest thing was that nothing seemed to change for the Irish team in the second-half, I thought that changes maybe would have come from the bench with around 15 or 20 minutes to go.

"As the clock ticked down I got more and more worried. We had the likes of Amber Barrett, who is in top form at Cologne, Leanne Kiernan and Ellen Molloy who came on with only a few minutes to go.

"I think Vera Pauw just had complete faith in the plan and thought she'd stick with it right up the 90th minute and beyond and that it work. I think the way the second-half was going, for me, the plan would have changed earlier than that because it just wasn't happening.

"When Emma Molloy came on they pushed Louise Quinn up top because at that stage what's the difference between losing 1-0 or 3-0? We had to get the draw, I feel it was left too late.

"It's not technically over yet, the position is that Ukraine are four-points behind but they have two games to go. They're playing against Greece and Montenegro, they've beaten Greece 4-0, but let's remember that Ireland dropped points in Greece where they drew 1-1 and there's potential for Ukraine to drop points against them but against Montenegro you'd expect them to get three-points.

"Ireland's final game is against Germany. What we're asking for there would be a win against probably the best team in the world at the moment. It's a massive ask so what we're asking more is that Ukraine drop some points in their final two games.

"Vera Pauw's done an incredible job and I wouldn't put it past them to get something out of the game in Dublin but realistically we're counting on Ukraine dropping points.

"It's a really frustrating night for the girls, they worked incredibly hard against a horrible team to play against, I'm really gutted."