Ireland captain Johnny Sexton says the team will be going all-out to try and win a fourth Six Nations title in seven seasons on Saturday night.

Last weekend's bonus-point 50-17 victory against Italy at the Aviva Stadium has Andy Farrell's side at the summit of the table going into the last weekend, with Ireland away to fellow championship contenders France.

England will be expected to also register a bonus-point win at basement side Italy in Rome but a bonus-point success for Ireland in Paris would see them crowned champions, not matter the result in Italy.

Sexton, who kicked a last-gasp drop-goal to kick start Ireland's Grand Slam campaign in Paris two years ago, says they're delighted to have things in their own hands this weekend.

"We'll still be going onto the pitch being able to win the trophy. It's what we play for. We train hard for these big days and we're looking forward to it. If we can get our performance right, it gives us a chance.

"We just have to wait and see. All we can control at the moment is our performance. We need to get our performance right. If it's a win or just a bonus point win, we're still going to play well no matter what.

"So, let's just focus on that aspect and hopefully if we perform well, we'll give ourselves chances and then it's up to us to take those chances on the day and be clinical." 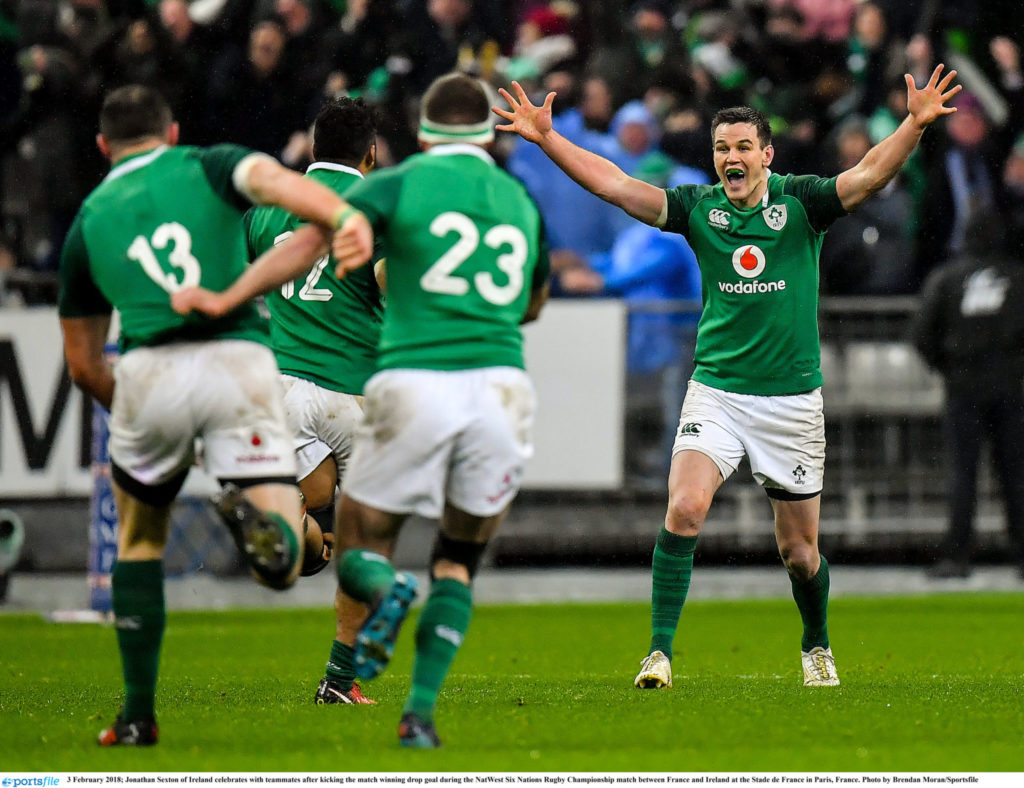 3 February 2018; Jonathan Sexton of Ireland celebrates with team-mates after kicking the match winning drop goal during the NatWest Six Nations Rugby Championship match between France and Ireland at the Stade de France in Paris, France. Photo by Brendan Moran/Sportsfile

Former Racing fly-half Sexton has pin pointed France's ability to create tries from nothing as their key threat going into the match at the Stade de France.

"You saw them against Wales last week and it looks like Wales are defending well and then out of nowhere, they're gone.

"Vakatawa has been in great form, Fickou has been doing well so from a backs point of view, they've got threats throughout. So, we're going to have be unbelievably connected and together because if you show them those dog-legs in defence or big gaps, they'll be through pretty quick.

"And then up front, they've got lots of power, they've got big men. It's a big ask. We know that but we're preparing ourselves for a big performance."