There was heartache for Ronan Grimes in the C4 Individual Pursuit at the Paralympic Games on Friday.

Despite a personal best, the Galway cyclist narrowly pipped to bronze by Colombia's Diego German Duenas and had to settle for 4th place.

Grimes had recorded a personal best time of 4:37.693 in the qualifier.

He shaved more than half a second off that best in the final to bring his PB down to 4:37.001, but it was not enough to win that bronze medal final.

“He has a little acceleration at the end that I am lacking," Grimes said, "I have come fourth against Diego in I don’t know how many races.

"The two of us are always battling on the road and the track.

"Disappointing to come out the wrong side of it. But I have to be happy with two PBs, especially in a ride off, when there’s a bit of pressure there for a medal.

"If I had gone slower I would have said I did wrong but everything I had was out there.”

Staying in the velodrome, and Richael Timothy set a new personal best of 42.485, which was good enough for a 10th place finish in the C1-C3 500m Time Trial.

Paralympic action began on the track, with Greta Streimikyte putting in a strong showing in the heats of the T13 1500m.

She qualified for the final, placing second behind Ethiopia’s Tigist Gezahagn Menigstu. 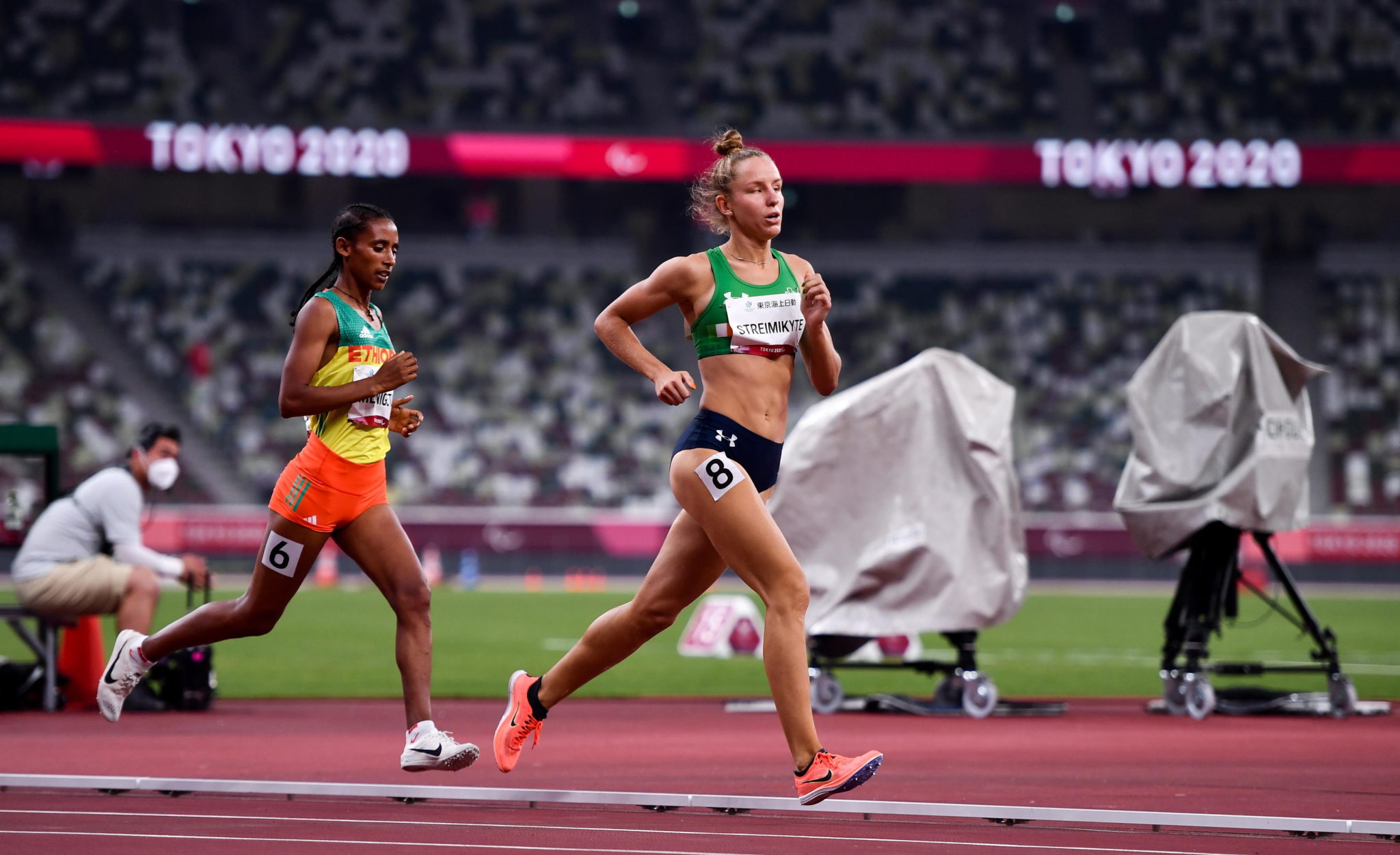 27 August 2021; Greta Streimikyte of Ireland, right, and Tigist Gezahagn Menigstu of Ethiopia competing in the T13 Women's 1500 metres heats at the Olympic Stadium on day 3 during the Tokyo 2020 Paralympic Games in Tokyo, Japan. Photo by Sam Barnes/Sportsfile

Having qualified in third place in her heat, Ni Riain came home fifth in the S13 400m Freestyle.

"I’m going to sleep, sleep and eat and rest and recover and get ready to go again!” the teenager said afterwards.

Meath archer Kerri Leonard placed 18th in the ranking round of the Women’s Individual Compound Open.

She'll return for the head-to-head round on Sunday, where she will first face India’s Jyoti Jyoti who finished 15th on Friday.

"It is a surreal statement to say I’m finally a Paralympian," said 30-year old Leonard, "It feels amazing to be able to put that moniker on myself now. I was hesitant to use it before today in case anything happened to rule me out so I’m just delighted now to have started. 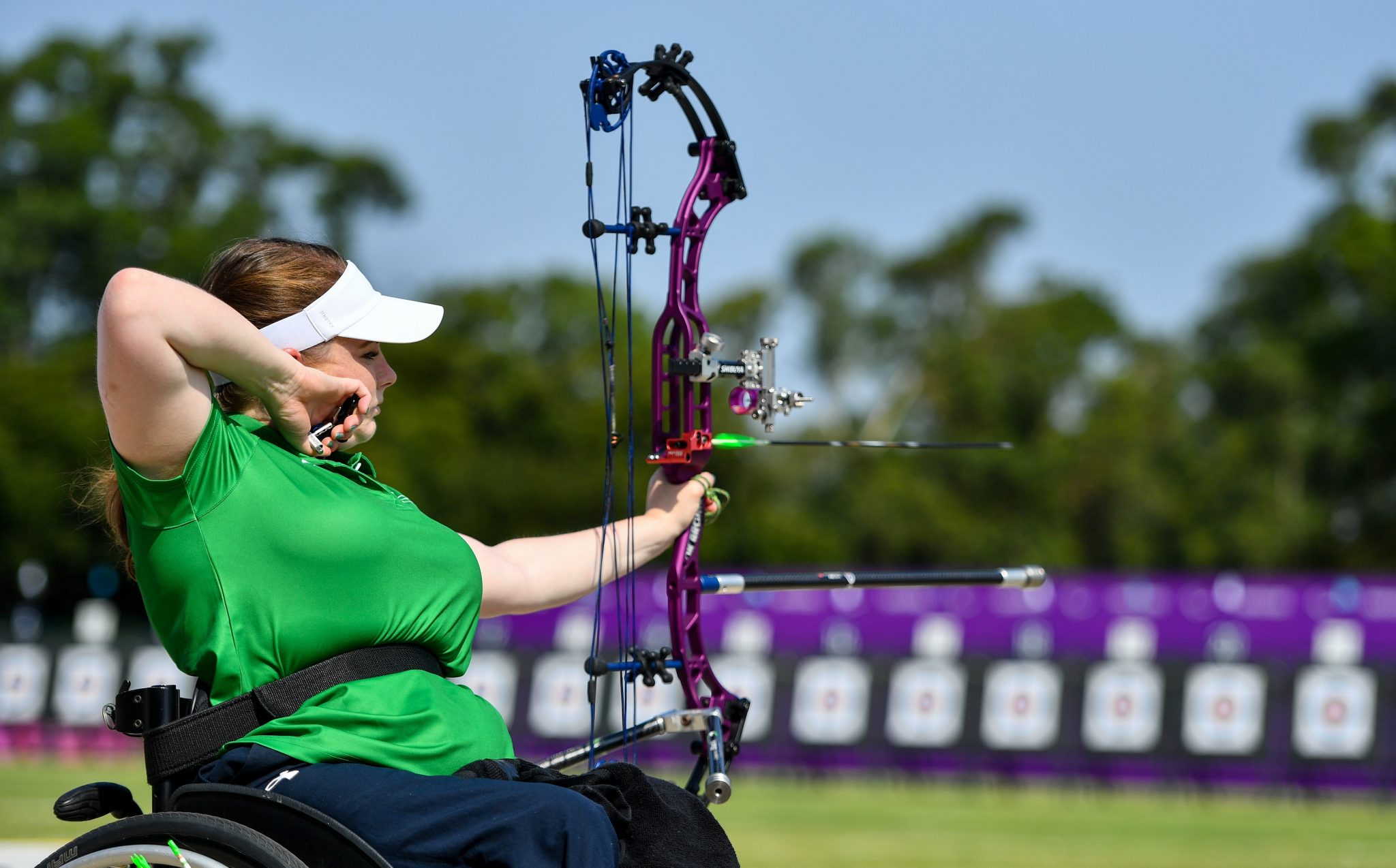 27 August 2021; Kerri Leonard of Ireland competes in the Women’s Individual Compound Open Ranking Round at the Yumenoshima Park Archery Field on day three during the Tokyo 2020 Paralympic Games in Tokyo, Japan. Photo by Sam Barnes/Sportsfile

“I was hoping for better so I’m a little bit disappointed with the scores.

"I had a bad first end. I had a slight technical issue that I couldn’t solve until I finished that end, but as soon as that happened the shots started to go where I wanted them.

“I really like the head-to-heads. You’ve got to get every single shot right. When you’re shooting a long competition with 72 arrows like this you can sometimes go into cruise control.

"The head-to-head is a much shorter format and you are forced to be on the top of your game so it really calls you out mentally.”

Elsewhere, Colin Judge's campaign in the Class 3 Table Tennis ended at the last 16 stage, with defeat to Vladimir Toporkov of the Russian Paralympic Committee.

A late penalty meant Kate Kerr Horan and Serafina T had to settle for 18th position in the Class 3 Para Dressage.

While Michael Murphy was 18th aboard Cleverboy in the Grade I Dressage.