The man who guided France to victory in Euro '84 on home soil Michel Hidalgo has died at the age of 87.

Hidalgo managed his country from 1976 to 1984 when he handed the reins over to Henri Michel.

During that time he turned a French side that hadn't qualified for the World Cup in 1970 or 1974 into World Cup semi-finalists by 1982.

And then two years later at the Parc des Princes he masterminded victory for Les Bleus over Spain in the final and saw Michel Platini lift the Henri Delaunay Trophy.

His managerial successes came after a fine playing career which saw Hidalgo play for Le Havre, Reims and Monaco.

He played - and scored - in the first ever European Cup final when Reims were beaten 4-3 by a Real Madrid side containing Alfredo Di Stefano.

At Monaco he'd win two league titles and the league and cup double in 1963.

Hidalgo also served as just the second ever president of the UNFP )National Union of Professional Footballers), succeeding the great Just Fontaine in 1963.

He took over from Stefan Kovacs as France national coach in November of 1975.

In his first game in charge - a friendly against Czechoslovakia in March of 1976, Hidalgo handed a debut cap to an 18-year old named Michel Platini with the then Nancy midfielder scoring from a free-kick.

Platini would be central to the successes of France and Hidalgo over the next eight years.

Hidalgo guided France to qualification for the 1978 World Cup - their first since 1966 - where they were drawn in a tough group with Italy and hosts Argentina and departed in the first round.

Despite the emergence of the likes of Platini, Didier Six, Alain Giresse and Patrick Battiston, France failed to qualify for Euro 1980.

But Hidalgo was forming a strong, formidable and richly skilled French squad - augmented in 1980 by Jean Tigana and Bruno Bellone et al.

They endured a wobbly start to the 1982 World Cup, getting beaten 3-1 by England in the heat of Bilbao and almost seeing their Kuwaiti opponents leave the pitch in protest in their second game.

But the midfield of Giresse, Platini and Tigana was helping cut a swathe through their opponents. France - under the instruction of Hidalgo - were playing bright, swashbuckling football.

They accounted for Austria and the giant-killing Northern Ireland before a Harald Schumacher hip-check on Battiston stopped them in their tracks.

They led West Germany twice only to lose on penalties in their semi-final in Seville.

Two years later, France were on hosting duties for the European Championships and this would be the crowning moment for Hidalgo and his talented side.

Denmark, Belgium and Yugoslavia all succumbed to Les Bleus, with Platnini scoring six goals in the group stage alone.

A breathless night in Marseille saw them edge Portugal 3-2 after extra-time to face Spain in the final.

Their 2-0 win in Paris would prove to be Hidalgo's final act as manager. 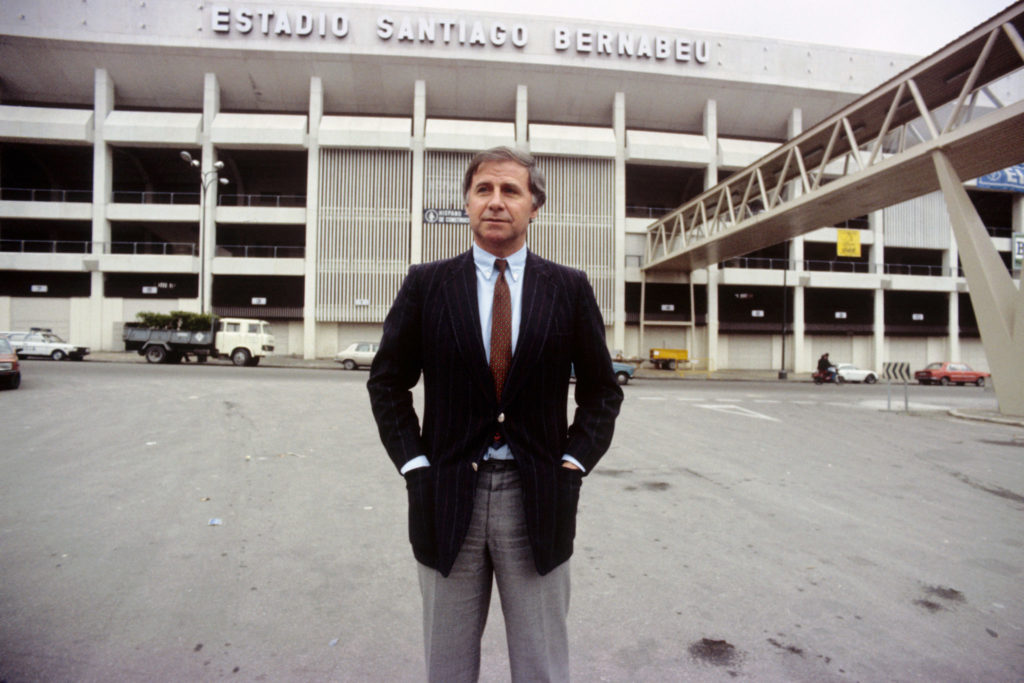 France coach Michel Hidalgo outside the Estadio Santiago Bernabeu in Madrid, the day after the draw for the 1982 World Cup Finals was made

So revered were Hidalgo's achievements as manager, that he was offered the position of Sports Minister by then recently-elected French Prime Minister Laurent Fabius.

Hidalgo told Le Figaro in 2007 that he regretted turning down the Prime Minister's offer as much - if not maybe more - than their World Cup semi-final defeat to West Germany.

He told the paper, "I missed a new adventure, another piece of life. I declined an incredible proposal. As a coach, I liked to represent France. In fact, this post of minister could have suited me."

Hidalgo's French squad got to spend time with their former coach in February, with Bruno Bellone delivering a moving tribute to someone they regarded as a father figure, "With Michel Hidalgo, it was a great moment of emotion, of nostalgia.

"It was great to see him again, to talk to him, to kiss him.

"We got into single file as if we were entering a field and we kissed each in turn.

"We introduced ourselves because he didn't recognise everyone, but that's okay, the important thing was to be together.

'I think he must have loved that he lived a great moment like the one that we lived we players. Henri Emile made a speech, Platini and Tigana too. It was moving. They said that the coach had brought a lot to all of us."

Hidalgo died peacefully at his home on Thursday of natural causes.

Australian Open preparations in disarray with 47 players forced to quarantine