As the six-year contract presented to David Moyes by Manchester United finally approaches its natural end, Daniel Harris considered the impetus behind Alex Ferguson's determination to have his fellow Scot succeed him.

After years of sustained success, Manchester United's fans continue to endure their longest run without a domestic title since a 26-year wait concluded in 1993.

The manager who brought about that breakthrough win and 12 more Premier League triumphs thereafter, Alex Ferguson's decision to handpick David Moyes as his successor preceded a sharp decline in the club's fortunes.

On Thursday's OTB AM, Daniel Harris posited a destructive motive that may have informed Ferguson's public approval of Moyes.

"It was so mad at the time," Harris noted of Moyes' 2013 appointment, "that it hasn't got any the less mad with time.

"Think what Alex Ferguson had to do to get the Manchester United job [in 1986].

"Smash the Old Firm in Scotland, win a European trophy with Aberdeen, and when he got the job with United, the club were rubbish.

"David Moyes had to do none of those things, and he got the job at United when United were champions.

"There was nothing to suggest he would be able to do that job other than Ferguson saying that he was.

"It's very hard not to identify a conscious or subconscious motive in Fergie's mind as to why he let that happen."

With Moyes, when Fergie called him up he didn't ask him if he wanted the job, he told him he was going to be the next manager of Manchester United 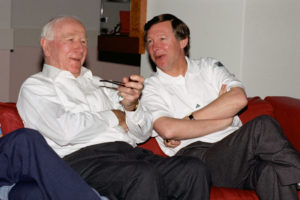 After overseeing such a sensational period of success with the club, Harris is of the belief that Alex Ferguson may have been as happy if United stalled somewhat in his absence.

"If he'd given it to [Jose] Mourinho at the time," Harris suggests, "what happens if he comes to this team who've just smashed the league and wins two European Cups in five seasons where it took Ferguson 20-years to win it twice?

"All of a sudden, it's like Ferguson was never there. Mourinho has this consuming, subsuming personality and he would suddenly dominate the club.

"Whereas with Moyes, when Fergie called him up he didn't ask him if he wanted the job, he told him he was going to be the next manager of Manchester United."

An appointment that would ultimately end in failure for the former Everton manager, Manchester United's struggles post-Ferguson look set to continue for the time being, at least.