The Dutch coach has led Ireland to top spot in their European Championship qualifying group with three games to play.

However, those three games have been put on ice, and the Euros themselves deferred until 2022.

Pauw is believed to have begun talks with the FAI over an extension, and she doesn't feel talk about the situation has become a distraction.

"Not at all, no, I'm probably very pragmatic in that that it's just something that needs to be arranged," she told a video conference on Monday.

"I've got no worries at all. It's not even in my mind - it will be arranged"

Ireland have only dropped two-points in Group I in the twelve available since Pauw took over.

While remaining sanguine on the prospect of the European Championships being pushed back a year, she says it will create a glut of games for her side to navigate next year.

"It's just that everything is moved forward, so we will get a congestion of games later on because the World Cup qualifying matches will start while preparing for a tournament - if we qualify.

"So our focus is first on getting the qualification done, getting our games planned - because that is not done yet - and play those games and make sure we qualify for 2022.

"Then the World Cup qualifiers will start in preparation for the tournament, so we just take it the way it is and if things are changing again then we adapt again.

Back-to-back wins over Greece and Montenegro in March left Ireland in a very strong position to qualify, albeit with home and away games with Germany still to come.

Pauw says she has "no doubt" that stadiums will be packed when football is allowed return at full steam in the country.

The "vibe" of Tallaght Stadium is something that's also taken the 57-year old.

However, games behind closed doors look like being a pre-requisite for the remainder of the year. It's something Ireland are familiar with, as their 3-0 win away to Montenegro was closed to the public.

For Pauw, it's just another circumstance to consider, "It would be a shame, because it gives this extra vibe, but we'll play the games like that."

Ireland's fortunes over the past 18-months have coincided with a clutch of players making their way to the UK.

Rianna Jarrett has signed for Brighton, while Leanne Kiernan's made fine progress since her move to West Ham from Shelbourne.

The improvement of the latter has really caught Pauw's eye, "Leanne Kiernan is a player that's developing really fast.

"I'm so happy that she's now playing in England, because now she gets the resistance to develop the part of her game that probably could help her develop [into] a top top player.

"She has the pace, she has all the things to break a defence.

"She now needs to develop it further at the highest level, and with the highest pressure.

"I'm sure that although people in Cork will not like it that they've lost her, but they will be proud of her and will follow her developments.

While she's delighted to see players like Kiernan and Jarrett make those new strides in the game, Pauw's been left frustrated by others' plight. 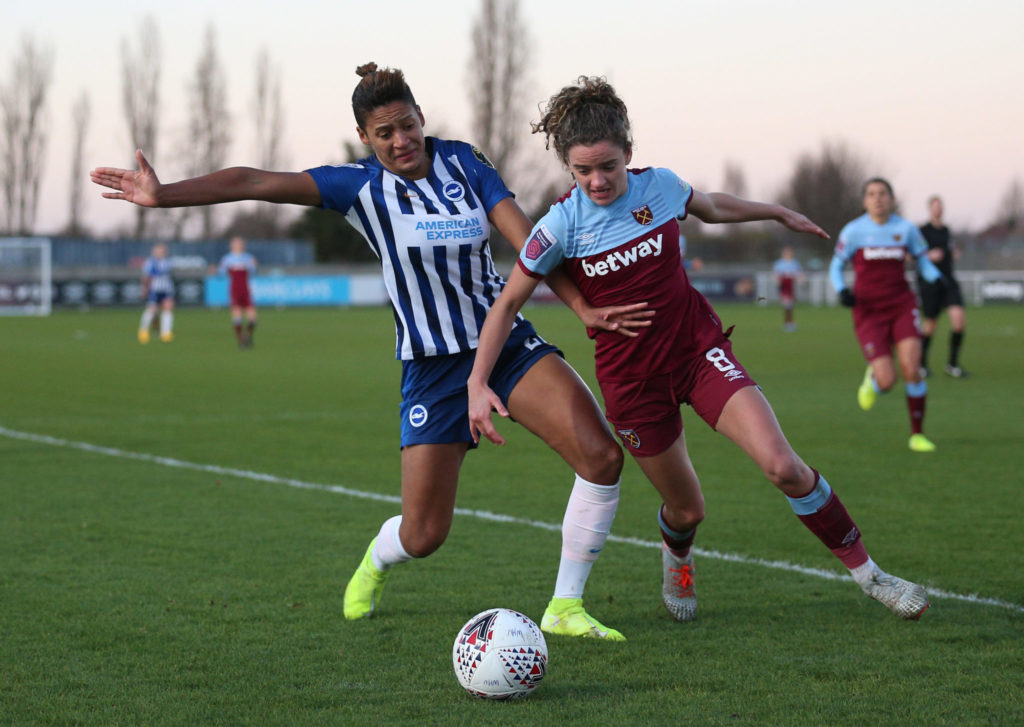 Heather Payne is currently plying her trade with the Florida State Seminols, something that's far-from-ideal, "Heather is a different situation because she plays in [the] USA, and that means she only plays two months a year of competitive football with too many games congested in those two months.

"That's also the reason she got injured - a highly-congested schedule into no schedule at all.

"We tried to help her to get into - let's say - the rhythm of playing, and being ready for a full game.

We thought that was the case, but a stretch towards the end of the game she protected herself by contracting her muscles immediately which would not have been done if she had been in a rhythm.

"We are hoping for the day that she's going into regular football into a big league."

"They can come to me with questions"

Despite frustrations over her US-based contingent, being a flea in a player's ear and encouraging them to move is not Pauw's game, "No, I don't encourage them - it's their decision, and it's a process that they have to take on.

"I'm not a coach that is getting involved in any transfers or any moves.

"They can come to me with questions, and ask me for advice of the circumstances, but I would never advise to go away from a club.

"I would advise over 'Where is she now? What is the load? How can she manage the load' and so on.

"Those things are the most important things for a national coach, not being a kind of agent and getting players away.

"As you can see with players like Aine O'Gorman, Niamh O'Reilly - who's now stepping up - Emily Whelan, Jessica Ziu, if you see their developments with the support that we can give them from the association together with their clubs - they are developing also.

"The thing is, the nature of top sport is that players want to play at the highest level against the best players in the world.

"So if they get the chance to go- for example - to England, you cannot stop them.

"I've been a top player myself, and if you can play in the highest league that's what you want, but I will not get involved in that." 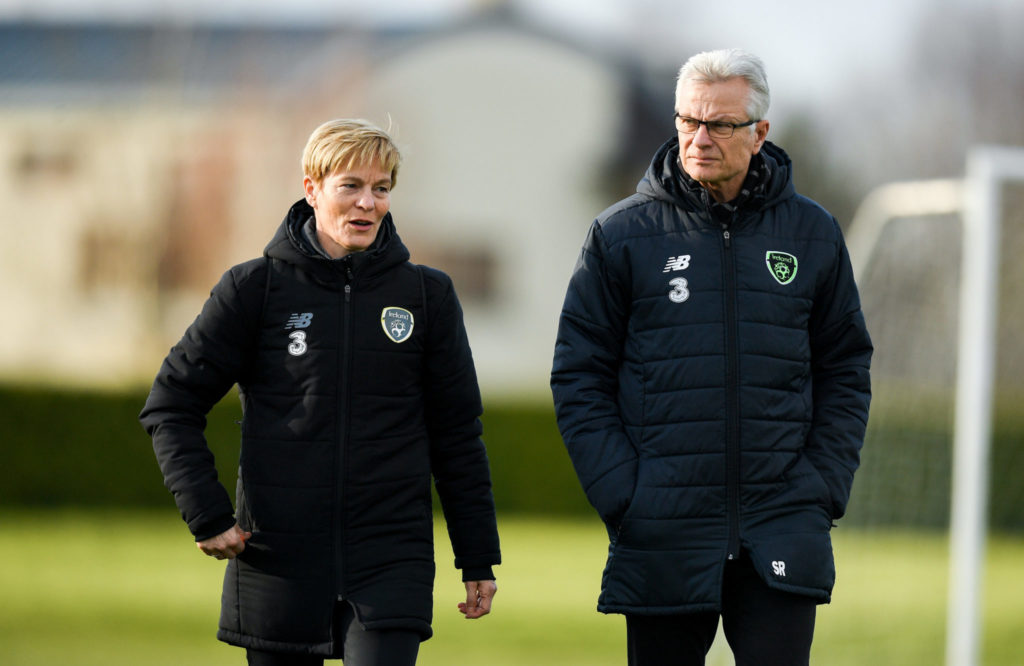 "You have to do more"

Indeed, Pauw thinks the Women's National League is more than capable of developing players, even if it can't do so fully, "Talents are everywhere. The key trick - the art - is to get those talents being developed.

"We all know that training twice a week at the club is not enough, so we need to do more outside that club activity.

"But the clubs do great jobs, and that is the heart and the base of our sport.

"To become a top international player, if you play in Ireland, you have to do more - training with boys, the home-based training sessions, special individual programmes.

"That's on top of their club activities, and that brings the development of the players to where they are now.

Despite the shutdown of football in the country, Pauw says she and the FAI are using the downtime wisely.

Along with the association's director of high performance Ruud Dokter and other senior members of the Women's set-up, they've been analysing how best to plug gaps in the system, "Don't forget the whole youth development programme that is now in Ireland from the under-15s to the senior squad.

"During this lockdown we are very intensively discussing how to create a seamless pathway for all the players in Ireland.

"We are very intensively discussing how to get the game in Ireland to a higher level given the circumstances that we have now."

Pauw feels her compatriot Dokter has done a superb job in aligning everyone's vision for the game in the country, "Ruud Dokter has done such a great job over the last years, I'm so impressed by that.

"The thing is, there's some gaps in the pathway at this moment.

"There's an overload - for example - up to the U12 activities, and then suddenly it drops and then it will be picked up at 16 again.

"The analysis is done by everyone who's been involved for years and years like Sue Ronan, Dave Connolly, James Scott, Ruud Dokter and Eileen Gleeson.

"So knowing those gaps, and knowing where the drops in the development is, now we have the time to really discuss 'What can we do, to not have these dips in their development process?'

"And that is something that has not so much to do with the clubs, that is more related to our activities and how can we balance it that we have the best best pathway for every player in Ireland."