Europe's Ryder Cup captain Padraig Harrington feels it was unfair of Brooks Koepka to insinuate that Bryson DeChambeau's lockdown bulk-up and improvement in ball speed were due to performance enhancing drugs.

DeChambeau, who put on over stones of muscle during the break in the season, averaging a new PGA Tour record 350.6 yards from the tee in winning the Rocket Mortgage Classic last week.

It led to former world number one Koepka posting a Kenny Powers GIF, seemingly in reference to his rivals' new-look physique.

"I think it was really unfair," Harrington said on OTB's Golf Weekly about Koepka's tweet.  "Any labelling with performance enhancing drugs, you would think it would be out of character for him because he's a softer person that people would think.

"Everything he's done is very explainable and very much there in front of you, the speed was there, the bulk is part of his story.

"When he turned pro, Bryson was on the practice range  in Memphis and myself and Pete Cowen were there, and he's a practicer like myself so of course there's only the two of us out on the range at that time.

"He's hitting shots and he's all about accuracy and he's hitting them out there at like 170 ball speed. I said 'give me one of your best' and he turns around and knocks one out there at 183 or 184 just like that and it's a slightly different swing, not quite his one playing swing.

"I said 'that's how you're going to do it as a pro' and he said 'no, I'm going to play this way' and I insisted that if he has 180+ ball speed then you have to use it because it's an advantage and he was quite dismissive of it because he didn't realise that if you have that in your arsenal you can't give up that advantage.

"Bryson didn't realise that because he was brought up with this stable swing but now he realises that whatever I've got, I've got to use it. At the moment it's a honeymoon period with the driver but it'll be interesting to see if the five or six guys with similar speed will start letting loose. I definitely believe it's changed the face of golf.

"As regards drugs, he's always had speed and he's even close to what's humanly possible in terms of speed." 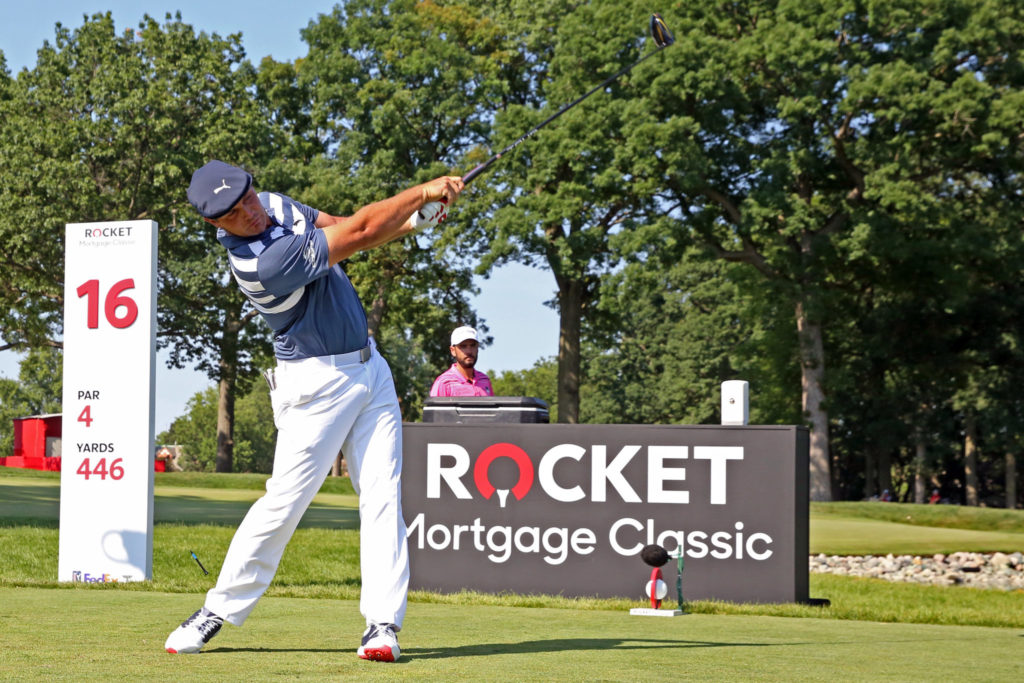 The three-time Major winner expanded on his observations of DeChambeau's transformation while in conversation with Peter Lawrie, Nathan Murphy and Joe Molloy.

"On a cold day 189 (miles per hour club-head speed) with hit three shots, it wasn't like he hit 100 shots, he hit three and they were 188/189. Everybody has a set speed in them and I've spent my life trying to find more speed, and to stay competitive on the speed thing, it's tough when you get to this level.

"If he's jumped that much, is it drugs? Well the arguments against it are that (i) he had the speed and (ii) if we compare it to other sports, he's running about 11 seconds for the 100-metres. He's about 15% behind what's possible in terms of speed at the moment.

"If somebody's running 11 seconds for the 100-metres we wouldn't be throwing accusations at hime about drugs. He's throwing a baseball at 95 miles an hour. Go watch Cameron Champ, he has more speed and it looks like he's hitting a pitching wedge.

"You've never seen a guy looking like he's hit the ball so easily, he reaches 200 miles per hour or close to it so smoothly.  DeChambeau has created a marketing ploy, the bulk and the buzz, 'I'm eating this many calories and I'm doing this', he's created this monster himself though.

WATCH: Koepka reveals origin of DeChambeau beef ahead of The Open