Shane Lowry: "I knew today I'd have to fight to the very end"

Ireland's latest golf major winner Shane Lowry says he went into the final round in the Open Championship at Royal Portrush in County Antrim that he had to "fight to the very end."

The man from Clara went into today with a four-shot lead, which was very reminiscent of the 2016 US Open at Oakmont in California, when Lowry had the same advantage on Andrew Landry and Dustin Johnson. Speaking after clinching the Claret Jug, he said:

"I knew I had to fight to the bitter end today. And that's what helped me. That's where I struggled in Oakmont. And I always said after Oakmont, if I could get the last four holes back - I'd give anything to be standing on the 14th fairway again, I had a wedge in my hand on 14.

"I always said I'd give anything to be standing there again. I knew today I'd have to fight to the very end, and I did. I  let myself think about it on 17 and enjoy it, but you're still hitting shots.

"Links golf, bunkers, rough, all sorts can happen out there. So I let myself really, really enjoy it going down 18. I was really just fighting until the end." 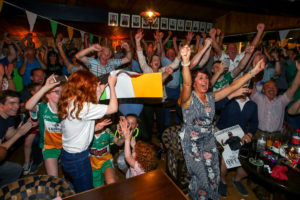 Shane Lowry has become the fifth Irishman to win a major title, and the first since Rory McIlroy won the PGA Championship at Valhalla in 2014. However, he said he didn't have the most ideal preparation for the final round, "I struggled last night because we finished very late last night.

"I didn't get out of here until like 8.30pm or 8.20pm or so. Got back to the house and had food. Went to bed at 11 o'clock but obviously, I didn't sleep very well. I'd say I slept four or five hours last night. I'd normally throw eight or ten hours at it.

Woke up in the middle of the night, thinking about all sorts. I was awake at half six this morning. So the tee time moved forward was quite nice, it was a couple of hours earlier than it was yesterday"