Ireland's Peter O'Mahony has been hit with a three game ban following his sending off in Sunday's loss to Wales.

The Munster flanker was shown a straight red card for dangerous play in the 14th minute of the Six Nations clash at the Principality Stadium.

A disciplinary committee has adjudged that O'Mahony's offence was "mid-range" in making contact with Welsh prop Tomas Francis' head with his shoulder while attempting to clear a ruck in a "reckless" manner.

He'll miss Ireland's games against France, Italy and Scotland but will be available to for the final round fixture against last year's champions England.

"He's gutted that he had to leave the field, that the lads had to continue for a large chunk of the game with 14 men," Ireland defence coach Simon Easterby said this afternoon before the hearing.

"People make mistakes, that happens. On the whole we responded really well to that. Obviously it would have been far better if we had 15 men on the pitch for a large chunk of the game but the decision was made.

"There were other decisions in the game that weren't made and we have to deal with that. We can't look back so massive disappointment for Pete in himself.

"He'll have to deal with that himself but certainly the guys have rallied around and hopefully get him back into the mix sooner rather than later." 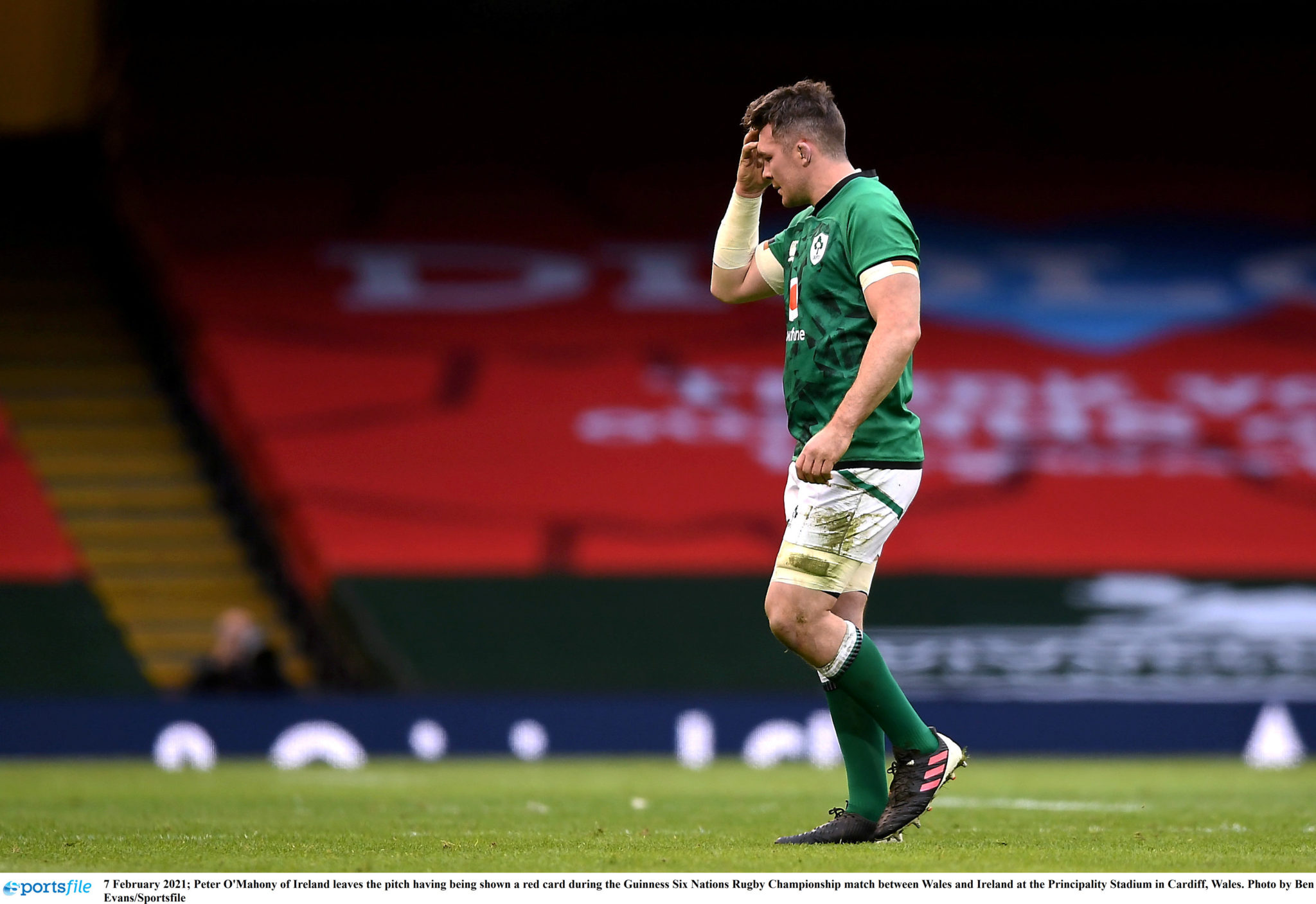 7 February 2021; Peter O'Mahony of Ireland leaves the pitch having being shown a red card during the Guinness Six Nations Rugby Championship match between Wales and Ireland at the Principality Stadium in Cardiff, Wales. Photo by Ben Evans/Sportsfile

"The Ireland back row forward, Peter O’Mahony, appeared before an independent disciplinary committee, comprised of Mike Hamlin (England), Frank Hadden (Scotland) and Val Toma (Romania), via video conference today. Mr O’Mahony received a red card during the Wales v Ireland match on 7 February 2021 at the Principality Stadium, Cardiff for an infringement of Law 9.20 (a) and (b) (Dangerous play in a ruck or maul) in the 13th minute of the match.

The player admitted the act of dangerous play in a ruck and that the offending merited a red card. The player did not seek to challenge the referee's decision. The committee considered all the relevant evidence, including the Player's oral evidence, together with the clips of the incident.

In assessing the seriousness of the offending, the committee found that the offending was reckless. They were satisfied that the player's conduct breached World Rugby Law 9.20(a), in that he charged into a ruck. Charging includes any contact made without binding onto another player in the ruck or maul. The Committee noted that the offending involved reckless contact with the head of the Wales No 3.

As the conduct involved contact with the head, although noting that no injury was suffered by the Wales No.3, the committee determined that the entry point was mid-range, which for this offence is six weeks. It was accepted that there were no off field aggravating factors, and the disciplinary committee concluded after careful consideration of the player’s record and conduct in the hearing, that the player was entitled to a 50% reduction of sanction in mitigation. The player is suspended from 7th February 2021 to 14th March 2021, which represents three meaningful matches to the player. The player is free to play again on 15th March 2021."