Fifty years ago this week Neil Armstrong and Buzz Aldrin landed the Apollo 11 lunar module 'Eagle' on the Moon's Sea of Tranquility. Off the Ball's resident space geek Shane Hannon examines the historical significance of the Moon landings half a century on.

Portrush is all set for The Open later this week, but no matter what Tiger and co bring to the Antrim course, it won't be literal 'out of this world' golf.

Leave that to Apollo 14 Commander Alan Shepard, who pulled out a makeshift six-iron during the third crewed lunar landing mission in Spring 1971 and hit two golf balls.

After hitting the shots, the Navy man, who ten years earlier had become the first American in space, remarked that he hit the balls "miles and miles and miles."

And although that was a slight exaggeration, the one-sixth lunar gravity did allow for a substantially longer shot than that which would have been possible with the same swing on Earth.

Not to be outdone, the Lunar Module Pilot on the Mission, Dr. Edgar Mitchell, who I had the pleasure of interviewing in 2012, threw a javelin even further.

When I say javelin, it was the staff of a solar wind experiment the astronauts were using on the Moon, but to the day he died in 2016 Mitchell asserted that by throwing his javelin further than Shepard had hit the golf ball, he was the winner of this 'First Lunar Olympics.'

Ordinarily, of course, an Olympic Games would be held every four years, but humans have not been back to the Moon since Captain Gene Cernan took the last steps of Apollo in the Moon's Taurus-Littrow Valley in December 1972.

Budget cuts and the lack of political will or a 'Space Race' to match those Cold War days are often bandied about as reasons for our forays only as far as low earth orbit since then.

If Mitchell was the Usain Bolt of the First Lunar Olympics, then the aforementioned Cernan must be considered the Michael Schumacher of the lunar Formula One.

The Apollo 15, 16, and 17 missions (which were the last three of the Apollo Program), were classed as 'J' missions. This simply meant they were equipped for longer-duration stays on the surface and more in-depth scientific and geological experiments.

This required the astronauts who landed on these missions to travel further away from the sanctity of the lunar module than ever before. Step forward the Lunar Roving Vehicle, or 'Rover.'

The rovers were designed with a top speed of about eight mph (13 km/h), although Cernan recorded a maximum speed of 11.2 mph (18.0 km/h), giving him the (unofficial) lunar land-speed record. 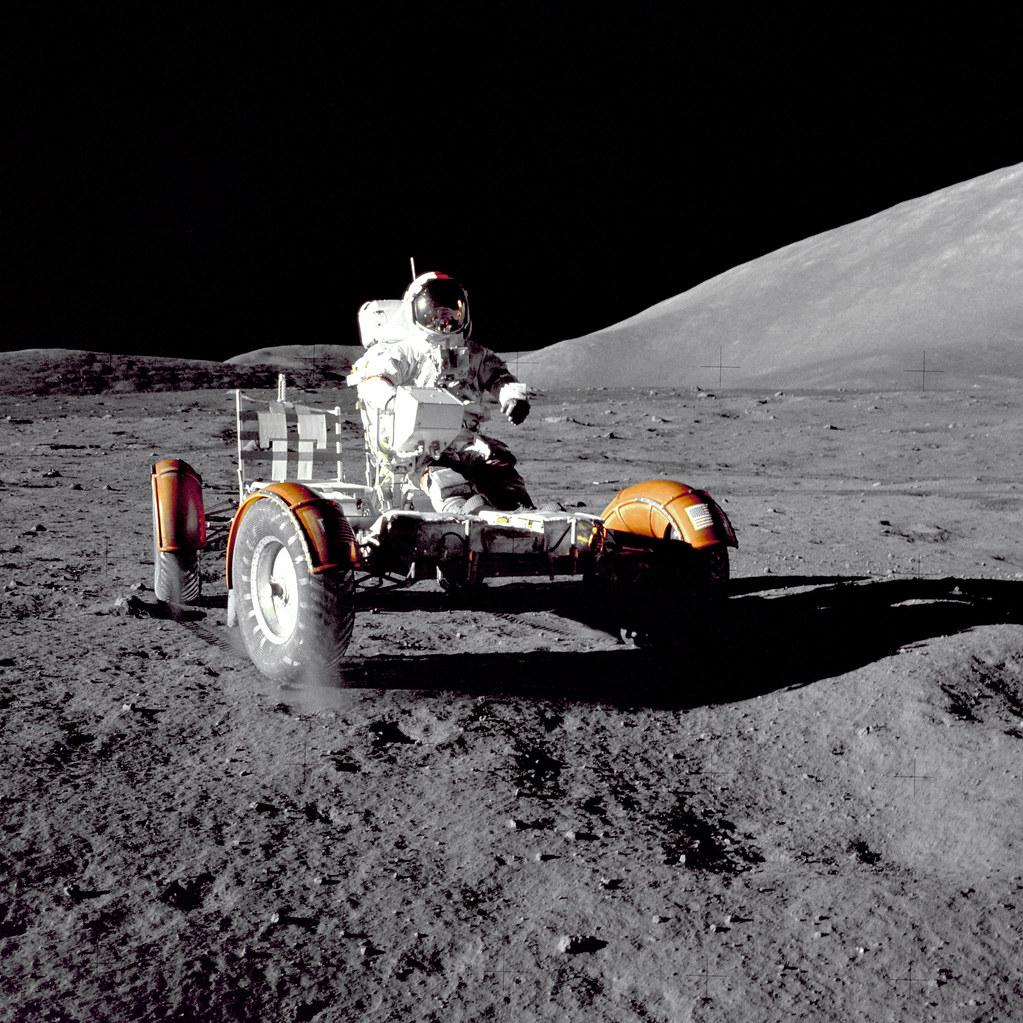 Astronaut Eugene A. Cernan, Apollo 17 mission commander, makes a short checkout of the Lunar Roving Vehicle during the early part of the first Apollo 17 extravehicular activity (EVA-1) at the Taurus-Littrow landing site. This view of the "stripped down" Rover is prior to loadup. This photograph was taken by Geologist-Astronaut Harrison H. Schmitt, Lunar Module pilot. The mountain in the right background is the East end of South Massif.

An estimated one million spectators watched the launch of Apollo 11 from the highways and beaches in the vicinity of the launch site. The launch was televised live in 33 countries, with an estimated 25 million viewers in the United States alone. Millions more listened to radio broadcasts.

It was truly a global event, and with colour television beaming back pictures of the astronauts on the surface, most people who wanted to watch the activities on the surface itself did. In fact, Apollo 11 Command Module Pilot Michael Collins, who orbited the Moon as his crewmates set foot on the surface, remarked that he was one of the only people who missed the excitement!

Each mission had a skilled astronaut that had to remain circling the Moon for the duration of the surface operations. Collins himself later revealed that he was very worried about Armstrong and Aldrin's safety.

He was also concerned in the event of their deaths on the Moon, he would be forced to return to Earth alone and, as the mission's sole survivor, be regarded as "a marked man for life".

In fact, U.S. President Richard Nixon had an already prepared speech in the event of such a disaster. This speech included the line “Fate has ordained that the men who went to the Moon to explore in peace will stay on the Moon to rest in peace."

The man tasked with staying in the Command Module on the second Moon landing mission - Apollo 12 - was Dick Gordon. After leaving NASA, Gordon actually became the Executive Vice President of the New Orleans Saints NFL franchise (from 1972 to 1976).

We're 50 days out from the 50th anniversary of the launch of Apollo 11, the first crewed landing on the Moon. 🌖

With #Apollo50 in mind, I'm going to tweet each day with a fact or anecdote you may not know about Apollo, based around items in my extremely random space collection. pic.twitter.com/ggH2DU2dth

That's not the only cosmic link to American football. Former space shuttle astronaut Leland Melvin is the only person to have both flown in space and be drafted by an NFL franchise.

Melvin was picked by the Detroit Lions in the 11th round as a wide receiver in the 1986 NFL Draft. During training camp, however, he pulled a hamstring and was released from the team.

The following Spring he reported to the Dallas Cowboys, but pulled a hamstring a second time, officially ending his professional football career. With a Bachelor's degree in Chemistry and Master's in Materials Science Engineering however, he was safe for work. He flew twice on the space shuttle into Earth orbit in 2008 and 2009.

The Apollo 11 crew were described as 'amiable strangers' by Michael Collins, and it's hard to argue with that description.

He was the artist of the three, a man fully in tune with the philosophical ramifications behind landing on the Moon. He also ultimately reached the rank of Brigadier General in the United States Air Force.

That decision to join the Air Force was partly motivated to avoid accusations of nepotism had he gone down the expected path and joined the Army. His brother was already a colonel, his father had reached the rank of major general, and his uncle, General J. Lawton Collins, was Chief of Staff for the U.S. Army.

Aldrin is an intriguing personality. At 89 years of age, he remains a firm advocate of further human space exploration - in particular a focus on sending people to Mars.

I met Aldrin twice, interviewing him seven years ago, and to say he is a tad eccentric is not unfair. He wears extensive jewellery and bracelets, enjoys the finer things in life, and years ago punched a Moon landing conspiracy theorist who decided to tell him he didn't walk on the Moon (look it up on YouTube). 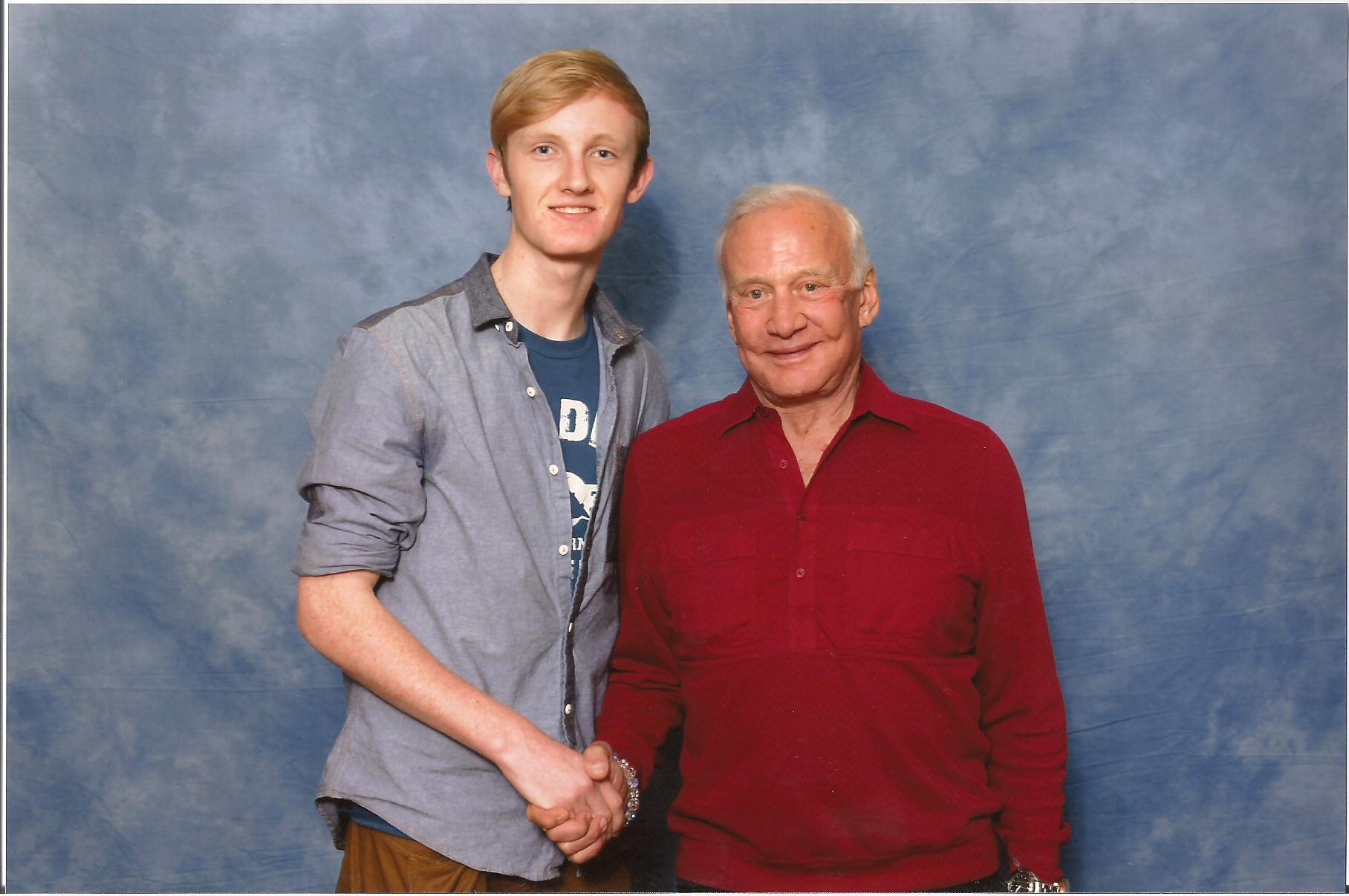 Aldrin himself battled depression and alcoholism after returning from the Apollo 11 mission and wrote about those troubles himself extensively.

In fact, his mother Marion (whose surname was Moon) sadly took her own life in 1968.

Armstrong then, who passed away in August 2012 at the age of 82, was the perfect fit to be the 'First Man.'

A decorated pilot who had flown the experimental X-15 aircraft, his 'One Small Step' in July 1969 is one that still reverberates as perhaps the most historically important moment of the twentieth century.

Civil rights demonstrations were taking place across Northern Ireland, with the Troubles about to get into its full, horrific swing.

Woodstock was the following month. The New York Jets were Super Bowl champions. The Boston Celtics were NBA kings. The New York Mets would go on to win the World Series.

That September Kerry won the football and Kilkenny took the hurling honours (some things never change).

Marvin Gaye, The Beatles and the Rolling Stones were in the charts. True Grit, Easy Rider and Midnight Cowboy were among the top movie releases.

And did you get up for that 'giant leap for mankind' at 02:56 AM in the early hours of July 21st to watch those historic first steps?