McCabe crowned Player of the Season by Arsenal supporters

Republic of Ireland captain Katie McCabe has scooped Arsenal's Player of the Season award, which was voted on by the club's supporters.

The 25-year old Dubliner receives the gong just over a month after she was named in the Women's Super League team of the season.

The club revealed the winner of the vote on their website on Thursday afternoon.

"Our overwhelming winner is Katie McCabe, who was rewarded for a sensational individual campaign by collecting almost half the votes cast," read the statement.

"The Republic of Ireland captain set up more goals than any other player with 13, and also netted stunning goals against Tottenham Hotspur and Aston Villa. 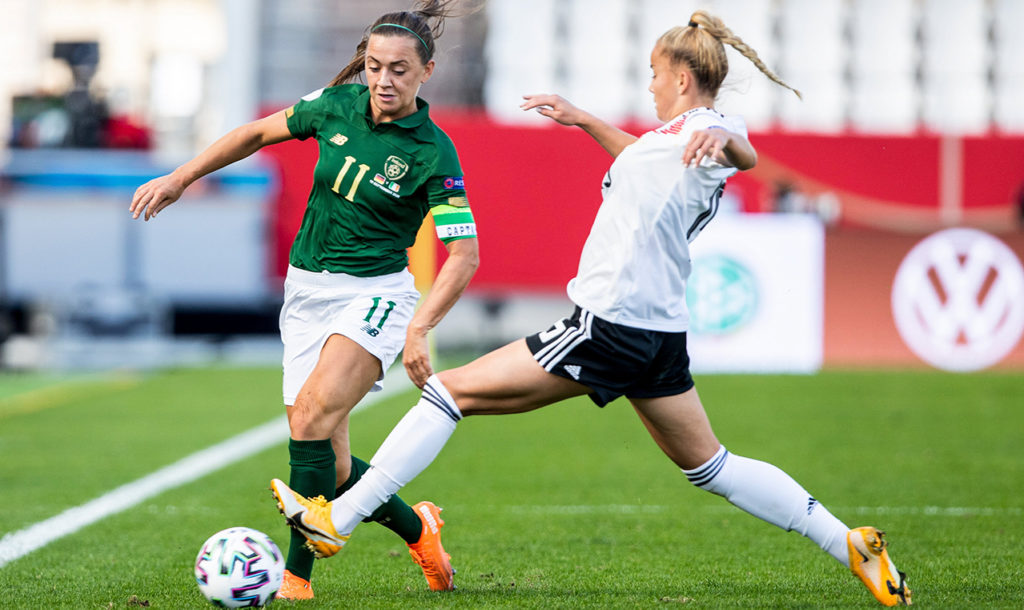 Katie McCabe of Republic of Ireland in action against Giulia Gwinn of Germany during the UEFA Women's 2021 European Championships Qualifier Group I match between Germany and Republic of Ireland at Stadion Essen in Essen, Germany. Photo by Marcel Kusch/Sportsfile

"McCabe topped our official poll, presented by MasterCard, with 48 per cent of the votes cast. Vivianne Miedema finished second, with Leah Williamson in third."

The former Shelbourne player has just signed a new "long-term" deal with the north London club.

"I just wanted to say a massive thank you for voting for me for the player of the season. It means the absolute world to me, especially coming from the fans," said McCabe.

"We really, really missed you guys last year and we cannot wait to have you back. A massive thank you again and hopefully we'll be seeing you soon."

A massive thank you from @Katie_McCabe11 ❤️

SOCCER/RUGBY | Katie McCabe and Jack Dunne will save lives