Less than two years after his acrimonious exit from Manchester United, Frank O'Farrell was leading Iran to tournament glory in front of more than 100,000.

Given the profile of the United job, the manner of his appointment and his disappointing departure, it's perhaps understandable that Old Trafford dominates the Corkman's profile now that he's passed.

But O'Farrell's career remains unique, with achievements unlikely to be matched in the footballing climate of the present day.

Not before he was anointed by Matt Busby in 1971, nor since his sacking just 18 months later, has an Irishman occupied the manager's office at Old Trafford.

Up until Brendan Rodgers went one better last season with the same club, O'Farrell guiding Leicester City to an FA Cup final in 1969 set him apart from his compatriots.

And O'Farrell remains the only Irish manager to have won trophies on the international stage.

This soft-spoken Corkonian, took up a job that Brian Clough knocked back, and led Iran to Asian Games success in 1974, and set them on the road to Asian Cup success two years later and, ultimately, World Cup qualification in 1978.

O'Farrell's managerial rehabilitation post-United came at Cardiff City, keeping them in the then Second Division in 1974 and guiding them to a Welsh Cup.

But as he told Off The Ball in 2009, "About a month before the end of the season, I had a phone call from one of the Iran officials, and he interviewed me up in London, he said what he wanted to talk to me about, and he offered me the job - which had been turned down by Brian Clough.

"He'd been offered it first - he went out there. And then when I was offered I had a word with him [Clough], he said 'it looks quite promising, I just didn't fancy it'.

"So he said, 'go out and have a look, and I think you might be surprised by what you see'.

O'Farrell was being hired with the intention of Iran winning the soccer tournament - at the newly-built, gargantuan, Aryamehr (now, Azmadi) Stadium - at the Asian Games which the country were hosting.

"The success of the games really depended on how successful the soccer team would be," O'Farrell said, "This was all explained to me before I went out and it appealed to me.

"They gave me a two-year contract. And after my experience at United, I needed to get away and reflect and assess where I was going to go for the rest of my time, having had a bad experience with people I would have expected more from."

His time in charge of the national team was an immediate success. O'Farrell was given plenty of time to work with the players prior to the Asian Games, which began with a 7-0 thumping of Pakistan.

This was the first time Iran were hosting the prestigious Asian Games, and remain so - even to 2034 and beyond. This was five years before the Shah was overthrown, and six ahead of Iran's invasion of Iraq.

Indeed, their neighbours were one of the sides narrowly beaten in the second group phase.

Iran would eventually beat Israel in the final by a goal to nil, in front of 120,000 expectant fans.

"The Shah was there, and his son... it was a great time of rejoicing," said O'Farrell.

"The job went quite well, and I really achieved what I went out to do.

"I stayed out there for another 18 months, because I got an U21 team going as well."

The job went so well, in fact, that Iranian team qualified for the 1976 Olympic Games in Montreal. After his contract was up, O'Farrell handed over the reins to his assistant, Heshmat Mohajerani, who guided the O'Farrell-built team to victory in the quadrangular Asia Cup tournament in '76.

O'Farrell said he found the Iranian people pre-Revolution to be almost Irish in their hospitality.

"I had an interpreter to start with," he told Off The Ball, "who was delighted to see me because he was a Leicester City fan. He went to Leicester University.

"He used to come into the camp if I wanted to give a long talk. I learned a little bit of Farsi - which is their language - but if I was giving a talk, he'd interpret for me. And he had a bit of a background in football, so he could put it over the way I wanted it put over." 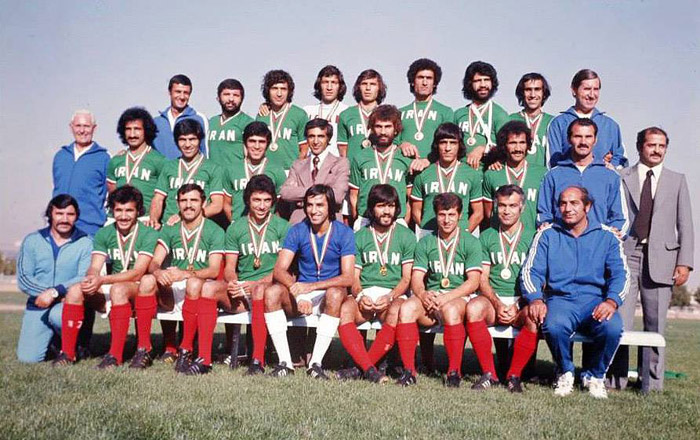 The Iran national team, managed by Frank O'Farrell (back right) that won gold at the 1974 Asian Games.

Not content with securing the Asian Games gold medal, and setting the country on the road to their first World Cup qualification, O'Farrell was occasionally summoned to the Shah's Palace to offer bespoke coaching for his son, and his classmates.

"I used to go up to the Palace and coach them," he revealed, "With the young heir apparent - Crown Prince Reza [Pahlavi] - he was a 15-year old, just like any other teenager.

"With his background sometimes he'd mess about... so if he misbehaved - he might kick the ball away, or he'd be talking when I was trying to explain a point - I'd say 'Reza! Ten press-ups!'".

"And the reaction of the other boys, they'd look with mouth open at me giving the next monarch of Iran ten press-ups.

O'Farrell added, "I thought the lesson might have helped him after when after the Revolution happened they had to come out and live like the rest of us."

He would be invited back to Iran in 2006 alongside Alan Rogers - one of his former colleagues - to commemorate their achievements with the country's footballers.