Leinster have issued an injury bulletin, including a Dan Leavy update, ahead of the trip to Ospreys on Friday night.

The eastern province has a relatively clean bill of health following the bonus-point win at the RDS on Saturday over the Cheetahs in Storm Dennis inspired atrocious conditions. 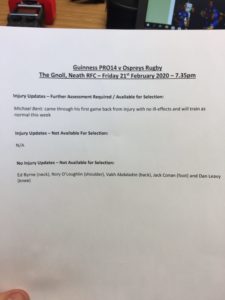 Michael Bent lasted 64 minutes in his return from injury, before being replaced by the Hawaii-born, former American footballer Roman Salanoa. The statement confirmed the Ireland-capped prop came through the game with no ill-effects and will train as normal this week ahead of the trip to Neath.

However following a welcome sight on Instagram recently there was a little more detail about Dan Leavy and his recovery from that horrific "complicated" knee injury that has ruled him out since last spring.

Leavy ran for the first time last week, and Leinster gave some detail about the flanker's continued steady recovery. The province said he's back running and doing well.

Given the nature of the injury, and the player's long absence they're not putting a timeframe or pressure on the player to return quickly.

Hope was expressed that, despite a predicted absence of another two-to-three months, Leavy could still line out in blue by the end of the season.

Luckless Dan Leavy has season ended by a knee injury