"I'd love us to be on the big European stage. It's good gravitas for the club."

Celtic have scored twelve goals in their opening two Scottish Premiership fixtures - last season it took the Parkhead outfit until October 7th before they reached that target.

Lennon says he doesn't mind how many goals they score as long as they win games.

"The players are capable of playing that way, the scoreline doesn't matter as long as we're on the positive end of it. I'm very pleased obviously that we are scoring.

The Celtic boss will be wary of the dangers Cluj can pose his side tonight, and in his pre-match press conference, pin-pointed areas his side will be keeping an eye on.

"They are a big, strong team, they have good pace in certain areas and they are direct."

"They are a threat at set-plays. I don't think it's going to be over-physical, it wasn't in Romania.

"There was plenty in the game in the first leg to suggest we could hurt Cluj in certain areas, so that's what we will be trying to do.

A tie with Slavia Prague awaits the winners in the next qualifying round, and Lennon knows his side must show the desire to be in the hat.

"Cluj will be hungry. You can see from some of the soundbites coming from them what the game means to them as well. We have to match that hunger and earn the right to play and then really play with purpose and a forcefulness." 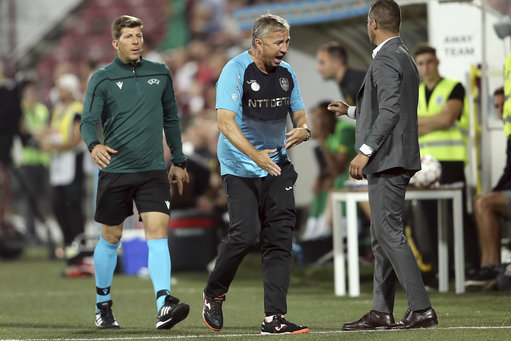 Cluj boss Dan Petrescu, who during his own playing career spent eight years in England with Chelsea, Sheffield Wednesday, Bradford City and Southampton, has been employing some mind games in the second leg build-up.

“It’s normal when you play Celtic in the Champions League and they are at home, that the referee gives them an extra 10 per cent of the decisions.”​

In response, Lennon rebutted the point. “Certainly not in Europe. I’ve been really pleased with the referees’ performances in all the qualifiers, to the point where we’ve not had to talk about them.​"

"I just ignore it because we have had our fair share of decisions go against us in Europe over the years."

Meanwhile, Lennon also insists there's no chance of the club selling James Forrest.The winger has reportedly been the subject of a £12 million bid from Russian side Zenit St Petersburg.

Lennon, who revealed a list of four "untouchables" at the weekend, has added Forrest to his not-for-sale group.

Kick-off at Celtic Park this evening is at 7.45pm.