Celtic have completed the signing of Republic of Ireland Under-21 international Lee O'Connor from Manchester United.

The 19-year-old defender has signed a four-year deal at Celtic Park.

Speaking to the official Celtic website, Lee O'Connor said: “It feels surreal at the moment but I’m just looking forward to getting the international break over with and then starting with Celtic.

“I found out last weekend about Celtic’s interest, and it went from there. Today was a bit hectic but I’m just glad to get it through before the window shuts.

“The Irish squad met up this morning and I spoke to the manager, Stephen Kenny, and he was fine about me coming here today. I’ll meet up them again tomorrow for training.

O'Connor was also keen to point out his strengths and what he will bring to Neil Lennon's set-up at Parkhead.

“I’m a versatile player. I can play anywhere across the back four or midfield if needed. I’d say that I’m a wholehearted defender. I love defending and tackling, but I like to get forward as well. First and foremost, though, I am a defender.”

The Waterford-born man was at Ibrox to watch the Old Firm derby win over Rangers on Sunday, and he also said he had visited Celtic Park with his family when he was younger for a stadium tour.

“It was a great result, so it’s a good start to the season for the team, and it was good to see a fellow Irishman getting a goal too,” he said.

“Walking through the Celtic Park tunnel, even in an empty stadium, I just want to run out on to the pitch, but I’ll just have wait and see what happens. It’s been a surreal week, but I’m really happy to be here and really proud as well.” 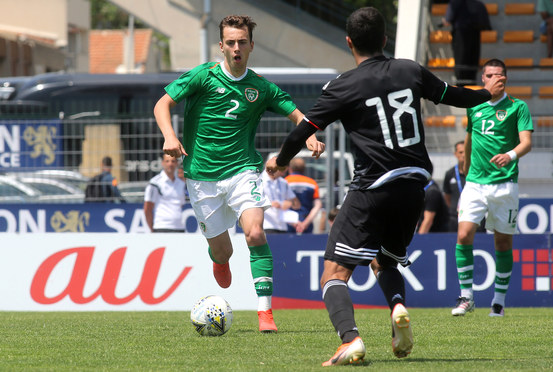 O'Connor was registered to Manchester United's Champions League first-team squad earlier this year having impressed in the youth ranks.

He joined the Old Trafford club in July 2016 from Villa Football Club in Waterford.

He was included in Martin O'Neil's senior international squad for the UEFA Nations League encounter against Denmark last November.

He joins his good friend Afolabi at the club - the 19-year-old striker penned a deal in Glasgow after being released by Southampton at the end of last season.

“I spoke to Johnny and he told me how everyone made him feel welcome, how well he’s settled in and how much he likes it, so that really helped me too,” he said. “I’m good friends with Johnny and Barry [Coffey], so it’ll definitely help me settle in.

“I just want to get started, work hard and give it my all, and hopefully the manager and all the staff will see why they’ve brought me here and I can make an impact.”