Does hurling have a diving problem?

Laois manager Eddie Brennan has said he is worried about simulation creeping into hurling.

The four-time All-Star with Kilkenny saw his side fall to a ten-point defeat to Liam Sheedy's Tipperary on Sunday afternoon at Croke Park in the All-Ireland Senior Quarter-final.

That result ended a very impressive summer for the O'Moore County - who saw off Leinster rivals Westmeath to win the Joe McDonagh Cup, before a famous win over Mattie Kenny's Dublin. They also maintained their position in Division 1B of the league for next year.

Laois had Aaron Dunphy sent off by referee Colm Lyons for an off-the-ball incident involving ­Tipperary’s Pádraic Maher early in the second half of last Sunday’s quarter-final against Tipperary, and Brennan has used that incident as a call-to-arms against diving in the sport.

"I think there’s a little simulation creeping into hurling the last couple of years and it’s worrying. At times you go, ok, if a lad’s on a yellow you test him, but at the end of the day you don’t want to see lads walking off the field unless it’s bad.

“The rules are there, and that’s the line you’re going to hear off the officials, but that was a match where there wasn’t a dirty stroke in the whole match and yet there was a ball of yellow cards thrown out." 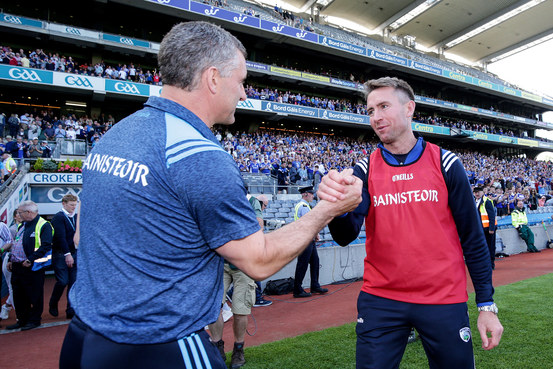 Brennan referenced, in particular, that incident that saw Dunphy receive his marching order.

“Go back to the simulation side of it and it’s something I hope doesn’t come into hurling. I’ve seen a few episodes of it and that’s possibly been levelled at Padraic Maher.

"The answer you’re going to get is it’s a strike with a hurl and that’s it.”

The Laois manager, who won eight All-Ireland medals during his own playing days with Kilkenny, also thinks there is a lack of consistency in officiating when it comes to the latter stages of the All-Ireland Senior Hurling Championship.

"In a way, look, black and white, it’s a strike of the hurl, no ­problem, we all accept that but I think if consistency is applied the next three games, then we’re going to see a nice few fellas sitting on the line.

"And we’ve seen the last few years where the standard of ­refereeing is applied the whole way up, then it seems to be let the handbrake off for the final and the semi-finals.

"We want intensity and we want good, hard-hitting, honest-to-God hurling, that’s what makes it what it is."