GAA ratification season is in full swing, and a number of appointments have been confirmed by respective county boards ahead of the 2020 campaigns.

The Corduff man previously took charge of his native county from 2004 through to 2010 and has since had spells in charge of both Meath and Wexford. He also steered the Monaghan minors to the Ulster minor title last year, before a narrow defeat to Kerry at the All-Ireland semi-final stage.

His full backroom team was first revealed by Off the Ball on Saturday morning. Former Tyrone coach Peter Donnelly comes onboard, as does the former Dublin football and Tipperary hurling stats man Ray Boyne.

I understand Seamus McEnaney and his backroom team were tonight overwhelmingly ratified as the next @monaghangaa management team.

The county committee (county executive plus a representative from all clubs) gave the approval at tonight's September meeting. pic.twitter.com/5XmNI58h7j

Donegal manager Declan Bonner and his backroom team have also been confirmed as staying on for at least another year.

His re-appointment came about at last night's county committee meeting. Bonner was initially given a three-year deal from 2021.

His side won the Ulster title this year in impressive fashion, but disappointingly exited the championship at the Super 8 stage.

Donegal also gained promotion back to Division One of the Allianz Leagues for 2020 alongside Meath, and the Royal County have also been busy ratifying.

Andy McEntee was approved for a further three years at the helm by the county board last night, with a review after two years.

McEntee has been in charge since 2017 and they reached a Leinster final this year before losing to Dublin. They then fell to three defeats in the Super 8s against Donegal, Mayo, and Kerry that ended their summer. 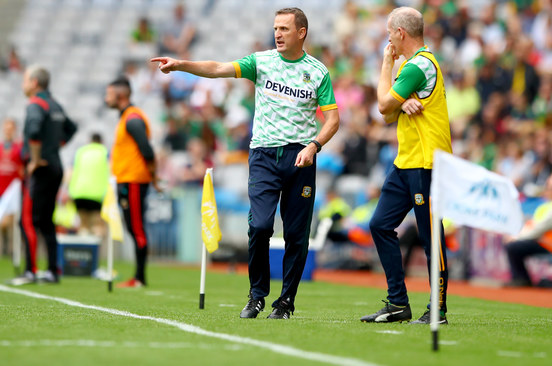 Clare football manager Colm Collins is set to meet with county board officials tonight with all signs pointing towards his ratification for a further year in charge.

The Kilmihil native is set to take the reins for a seventh year in 2020. That will make him the third longest-serving current manager after Mickey Harte at Tyrone and Jim Gavin with Dublin.

The Clare hurlers are also poised to have continuity next year.

Joint-managers of the team Donal Moloney and Gerry O'Connor are set to stay on wit the Banner for 2020. There may well be changes to their backroom team, but do look likely to confirm for a fourth year in charge.

There's good news for Wexford hurling fans too as Davy Fitzgerald looks set to commit to a fourth year in charge.

His side lost at the All-Ireland semi-final stage to Tipperary in July.

John Kiely will also remain in charge of the Limerick hurlers for their next campaign. He was officially re-appointed at a county board meeting last night.

There are set to be changes to their backroom team, with Joe O'Connor having stepped away from his strength and conditioning.

Kiely led Limerick to an All-Ireland triumph in 2018,  and as also brought league and Munster championship success to the Treaty.

The Irish Independent meanwhile are reporting that Kevin Walsh is set to step aside from his role as Galway football manager.

The Killannin man oversaw a disappointing fifth year in charge this year as the Tribesmen lost to Roscommon in the Connacht final and then Mayo in the qualifiers.