Euro 2021: Montenegro v Rep of Ireland - all you need to know

The Girls in Green put their unbeaten record on the line in Budva on Wednesday afternoon as they take on Montenegro in their next UEFA Euro 2021 qualifier.

If Ireland make it two group wins from two against the Montenegrins they will go top of Group I, one point ahead of Germany whom they have yet to play against.

Having claimed a 1-0 home win over Greece last Thursday, they are halfway to meeting the target set by Irish boss Vera Pauw ahead of this pair of matches.

"We set ourselves the target of six points from two games in this series, so having beaten Greece last week we now know that our job is to beat Montenegro to complete that task," said Pauw.

"We know what to expect from Montenegro and we will need to apply a lot of pressure to break through and score the goals that we need to win the game.

"So that is what we have been preparing for."

Tyler Toland and skipper Katie McCabe, from the spot, scored either side of half-time to seal a 2-0 win in the reverse fixture at Tallaght Stadium last September. 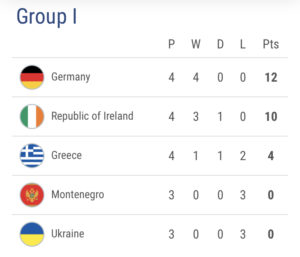 The nine group winners and the three best runners-up (not counting results against the sixth-placed team) qualify directly for the final Euro 2021 tournament, while the remaining six runners-up advance to the play-offs.

To keep their qualification hopes alive it is important that Ireland take maximum points from Montenegro, who have yet to earn a point, ahead of their meeting with current group leaders Germany next month.

"We haven’t had that much time together to work as a team with only a few days training before the Greece game, but I’ve told the players that the more time we have together then the better we will become in possession and in finishing chances in front of goal," added Pauw.

"And that, ultimately, is what we need to do in order to take the three points. We have prepared well for this game and we are looking forward to it."

"We're going to go there confident for sure but we're not going to to take them lightly at all."

Players of the @FAIreland women's team as well as head coach @verapauw spoke ahead of tomorrow's game against Montenegro. #COYGIG@paddypower pic.twitter.com/sbYzqxiBcT

The hosts have played just one match at home in the campaign so far, a 4-0 hammering by the Greeks.

However, Ireland's midfield maestro Denise O'Sullivan is refusing to read too much into that result.

"We're going to go there confident for sure but we're not going to take them lightly at all," O'Sullivan told Off The Ball.

You can listen back here to Ireland manager Vera Pauw speaking on Off The Ball ahead of the Montenegro game.

TEAM NEWS
Stephanie Roche linked up with the squad following the withdrawal of Chloe Mustaki (knee), while Emily Whelan was recalled from the Women’s Under-19s following an injury to Heather Payne (hamstring).

- Ireland and Montenegro have both yet to qualify for the UEFA Women’s European Championships.

- Midfielder Niamh Fahey is set to win her 90th senior cap having made her debut against Portugal in March 2007.

- Stephanie Roche has been drafted back into the squad not long after confirming that she will rejoin Peamount United following stints in France, United States, England and Italy.

- Emily Whelan, who started in the 1-1 draw with Greece last November, was in Spain with the Ireland Women’s Under-19s preparing for two friendlies with Russia when she was recalled to the senior squad.

- The crowd of 4,511 that turned up for Ireland v Greece last week was the second-highest in the history of the Ireland Women’s Senior Team

- RTE2 will again provide live coverage, as they have done for each of Ireland’s games in Group I so far. The game will also be available worldwide via the RTE Player.

- Ireland have scheduled a friendly away to Serbia on April 14 – three days after their qualifier against Germany.