England Rugby have been fined £2000 (€2300) for their sides' response to the All Blacks pre-match haka during their Rugby World Cup semi-final on Saturday.

Eddie Jones' side won the game 19-7 in Yokohama to set up a final against South Africa this weekend.

World Rugby rules stipulate teams must remain within their own half of the pitch to receive the challenge.

Referee Nigel Owens and his team had to usher several England players back as they strayed over the halfway line.

The fine, which will be donated by England to charity, comes despite World Rugby themselves posting a video of the haka appearing to praise the audacity of the haka response.

All Blacks Head Coach reacted to the news of the fine with support for England's haka reaction.

"They didn't get fined for responding, they got fined because they went over halfway.

England star Owen Farrell appeared to smile during the haka, and he said he and his teammates knew they needed to give a response.

"We knew we had to be in a radius behind them and we wanted to not just stand there and let them come at us.

"We wanted to keep a respectful distance and be respectful to that but we didn't want to just stand in a flat line letting them come at us." 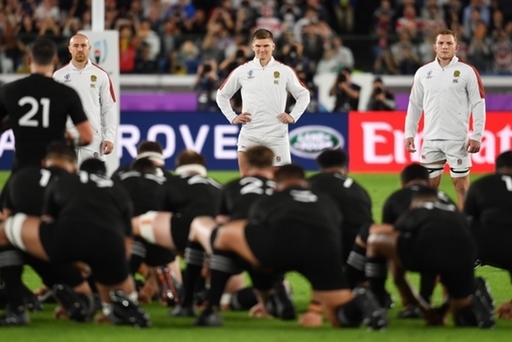 Hansen also said after the game he was proud of his players regardless of the result.

"As hard as it is to stomach that's what happens in sport sometimes. We see the character of people when they win and we've got to see the same character when they lose. Whether we're a fan, a player or a coach, we've got to stand up and be the same people we are when we win.

"The team that took the game won the game. We've got no regrets, I'm very proud of the All Blacks at this tournament, they've played particularly well and just on tonight, we got beaten by a better side.

"Sometimes you might find sport's not fair, but tonight it was, we got beaten by a better side."

Meanwhile, the All Blacks boss has made seven changes to his New Zealand side which lost to England ahead of facing Wales in the Bronze medal match on Friday.

Amongst the players coming into the team are Dane Coles and Sonny Bill Williams.

Kieran Read captains the All-Black's in what will be his final international appearance.

Warren Gatland has made nine changes to his Wales team. Owen Lane, Nicky Smith and James Davies are amongst the players to come into the side.

All Blacks team named to face Ireland at the Aviva