The trialling of fans' return to Irish sporting venues will begin within a fortnight.

The Littlewoods Ireland National Camogie League final, Leinster Rugby and Cork City are among those that will be the first to benefit.

June 11 has been pencilled in for fans' tentative return to sporting venues.

The Guinness PRO14 Rainbow Cup meeting of Leinster and the Dragons will be among the pilot events, with 1,200 fans at the RDS.

On the same night 1,000 fans will see the SSE Airtricity Premier Division clash of Shamrock Rovers and Finn Harps, with 600 at Turners Cross for the First Division game between Cork City and Cabinteely.

Tallaght Stadium will again have fans inside the ground for Rovers' June 26 visit of Drogheda United, again with 1,000 supporters present.

This year's National Athletics Championships at Morton Stadium is another major event on the list, with up to 400 people permitted. 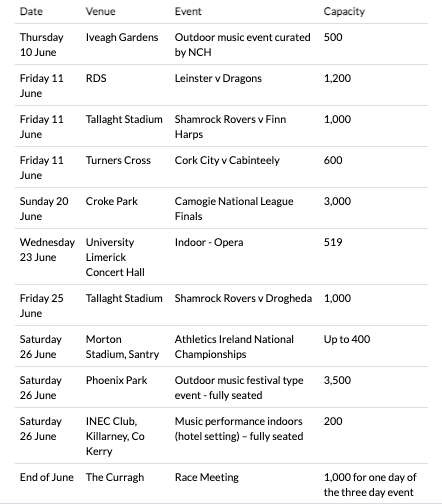 List of the government's pilot events for the return of crowds

1,000 punters will be allowed for one day of the festival.

Croke Park will see the return of fans on June 20 for the Camogie League final, with 3,000 fans allowed.

The plan brings to fruition the hope of Minister Catherine Martin, who told The Hard Shoulder on Newstalk that she was "keen" to see test events happening by June.

The Taoiseach had previously told Off The Ball that he was hopeful of fans returning to stadiums across the country in July.

Sligo Rovers to no longer accept sponsorship from gambling companies