Pubs And Gyms Could Reopen In August Under New Government Plans

Pubs, gyms, cinemas and theatres could be allowed reopen in August, under a roadmap for the easing of coronavirus restrictions announced by the Government this evening.

The roadmap - which has now been published online - details five 'phases' of easing of restrictions, with three weeks between each phase.

There's a warning the plans could change if there's any further increase or spike in coronavirus cases.

However, under the roadmap being put forward today, businesses such as garden centres and hardware stores would be able to begin reopening from May 18th.

There would then be a gradual extending of the types of businesses that can reopen over the rest of the summer.

The final phase would begin on August 10th, and see widespread reopenings of various businesses and recreational spaces - but only when social distancing can be maintained.

Small retail outlets and open marts could begin reopening from June, while restrictions on 'higher risk services' such as hairdressers and barbers would be eased from July.

Under the proposals, there will be a gradual increase in the number of people from different households who can meet - initially up to four people being able to meet outdoors while "maintaining strict social distancing".

Crèches, childminders and preschools for children of essential workers will be allowed reopen from 29th June - with wider reopening of childcare services three weeks later. 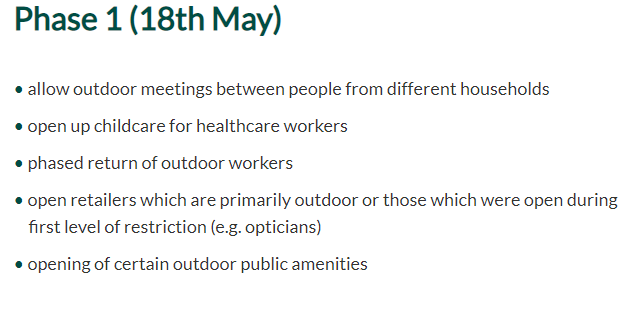 There will be a gradual process for allowing people to return to workplaces, with a phased “return to onsite working” arrangements in August depending on the level of risk from the virus.

Outdoor tourism sites will be able to reopen on a limited basis from May 18th, with public libraries to reopen three weeks later and playgrounds reopening at the end of June.

The likes of museums and galleries could begin reopening in phase four with strict hygiene and social distancing measures in effect, followed by more widespread opening of cultural and recreational facilities three weeks later.

Cafés and restaurants could resume on-site services from June 29th, but pubs, bars and nightclubs will remain shut until August.

In terms of sports, May 18th will see the likes of tennis courts and golf courses reopen for small groups of up to four - with gradual easing of restrictions for other sports until the resumption of close contact sports and spectatorship in August.