One of the worlds biggest cycling races rolls into the city later.

The Giro d’Italia will make it’s way down the east coast from Armagh before finishing on Merrion Square.

Irish Rail are putting on extra commuter services as well as longer DART.

But Spokesperson Jane Cregan says passengers need to know about one small change.

Anyone wanting to get a vantage point to see the Giro cyclists whizzing by is advised to check the official Giro schedule.

It gives an estimated arrival time at each town along the route.

Elaine O'Sullivan from AA Roadwatch has a breakdown of the roads that will be closed in the capital this afternoon:

Communications Manager with Dublin Bus Cliona NiFhatharta says passengers should check their website before travelling in: 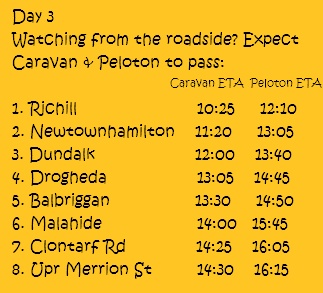 Simon Coveney To Meet With The Women From Defence Forces Documentary