WSL | 5 things we learned from Week 3

After a couple of weeks' break in the WSL, the league action returned over the weekend. Here are five things we learned from Week 3.

The Women's Super League was only a fortnight in when it took a two-week break for international and FA Cup fixtures. The league returned last weekend.

There appears to be something happening at Everton Football Club. A bit like the men’s team making a strong start to the season, the women’s team are doing likewise.

Manager Willie Kirk has turned the side around massively over the last 18 months, from battling relegation to showing they can challenge the top sides in the league.

Following on from their FA Cup semi-final success midweek, the Toffees put six past newly-promoted Aston Villa. New signing Hayley Raso looks like an exciting addition with two goals and an assist against Villa. Claire Emslie also bagged herself a double, while the remaining two goals came from Chantelle Boye-Hlorkah and French striker Valerie Gauvin.

The win means Everton maintain their 100% start to the season intact and sit alongside Arsenal at the top of the table on nine points. 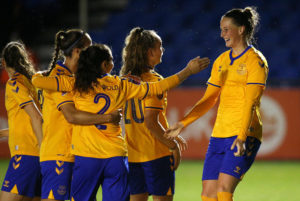 Manchester City struggled to click during the first few games of the season. However, performances in the FA Cup midweek against Arsenal and a 4-1 win over Tottenham Hotspur at the weekend show City are beginning to click.

City made some big-name signings, such as World Cup winners Sam Mewis and Rose Lavelle as well as Alex Greenwood and Lucy Bronze from Lyon. However, it is the capture of Chole Kelly from Everton which is the standout transfer.

Kelly fired a couple of warning shots against Spurs 'keeper Becky Spencer early on and it was third-time lucky when she scored with a right-footed strike from the edge of the area. Kelly grabbed her second from the penalty spot after Gemma Bonner went down from a nudge in the back.

US star Sam Mewis slotted home City’s third after some nice movement and a one-two with Janine Beckie. England forward Ellen White grabbed City’s fourth with a header, while Spurs managed to get a consolation in the latter stages of the match when Abby Filbey scored. 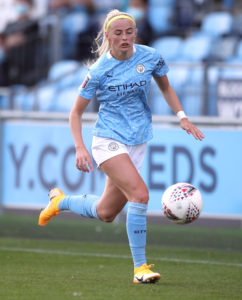 Fran Kirby back top her best

After missing the majority of last season through illness, Fran Kirby’s place in the Chelsea team appeared under threat.

With the signing of Sam Kerr in January and Pernille Harder ahead of the season, it looked like Emma Hayes’ side was pretty well stocked in the forward positions.

Kirby, however, has hit the ground running at the start of this season, starting each match so far, scoring in her last two games and looking creative behind the strikers. Kirby appears to be back to full fitness and reaching her best again.

Kirby scored the winner in a 1-0 victory over Birmingham City on Sunda via a header from an Erin Cuthbert free-kick. The England international will hope to continue this run of form and work her way back into Phil Neville’s plans ahead of next year’s Olympic Games. 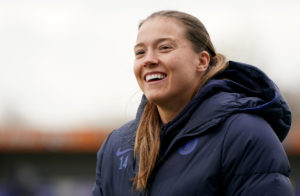 Arsenal came from a goal behind against Bristol City to secure a 3-1 win and keep their 100% record from the start of the season.

Bristol took the lead thanks to an Abi Harrison goal early on. Arsenal’s equaliser came thanks to Jordon Nobbs’ right-foot. For the third match in a row, Nobbs showed that her talents should not be forgotten.

Arsenal took the lead in the second half when Caitlin Foord poked home from inside the six-yard box. Vivianne Miedema scored six goals in this fixture last season and made sure she was on the scoresheet this time around by scoring Arsenal’s third in the dying stages. 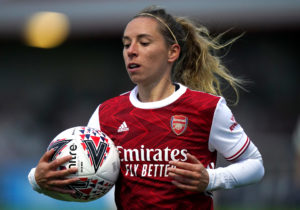 Arsenal's Jordan Nobbs with the ball during the Barclays FA WSL match at Meadow Park, London.

Irish goalkeeper Grace Moloney was the hero in Reading's 1-0 win over West Ham United on Sunday.

Reading took the lead by a Lauren Bruton goal in the first half. It was Moloney, though, who will take the plaudits for Reading’s second win of the season. West Ham went close to pulling one back when Adriana Leon’s close-range strike was tipped over the bar by the Irish shot-stopper.

Moloney was called into action again when Leon powered another shot at goal only for the 'keeper to push the ball off the post. It was looking like all her efforts to keep West Ham out were about to be undone when Moloney conceded a penalty by trying to reach the ball ahead of England international, Rachel Daly.

Kenza Dali stepped up to take the spot-kick for the Hammers, striking low into the corner. Moloney got down well to her left-hand side to make the save and keep a clean sheet.

Moloney has been called up to Vera Pauw’s squad to face Ukraine later this month. 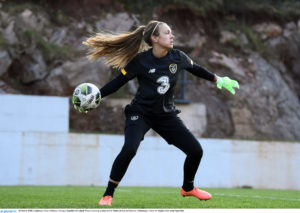 The WSL continues at the weekend with matches streaming live on the FA Player.

BT Sports are broadcasting two matches this weekend, the first being Tottenham Hotspur v. Manchester United on Saturday at 12.30pm followed by the clash of title contenders Chelsea against Manchester City on Sunday at 2.30pm.