The second leg of Bohemians' UEFA Europa Conference League second qualifying round tie will take place at the Aviva Stadium.

The club and the FAI confirmed in a joint statement on Monday that the match against Dudelange of Luxembourg will take place at the Dublin venue on Thursday, 29 July (k/o 19:45).

The Gypsies sealed progression to the second round with a 3-0 win (4-1 agg.) against Icelandic club Stjarnan, with 6,000 supporters in attendance as part of the government's pilot test events for the return of spectators to sporting events.

"As was the case for the previous round against FC Stjarnan, there will be an exclusive window for club members and season ticket holders to purchase tickets," the club's official statement read.

"Once again, tickets will NOT be available to purchase in singles. This is to ensure maximum safe capacity, while also adhering to social-distancing requirements."

"General admission tickets are priced at €20, premium level €30, while there will be a limited number of U16s tickets available at the reduced rate of €10. This game forms part of the Government’s ongoing pilot programme for the safe return of spectators to sporting fixtures.

"Capacity and ticketing arrangements will be confirmed tomorrow." 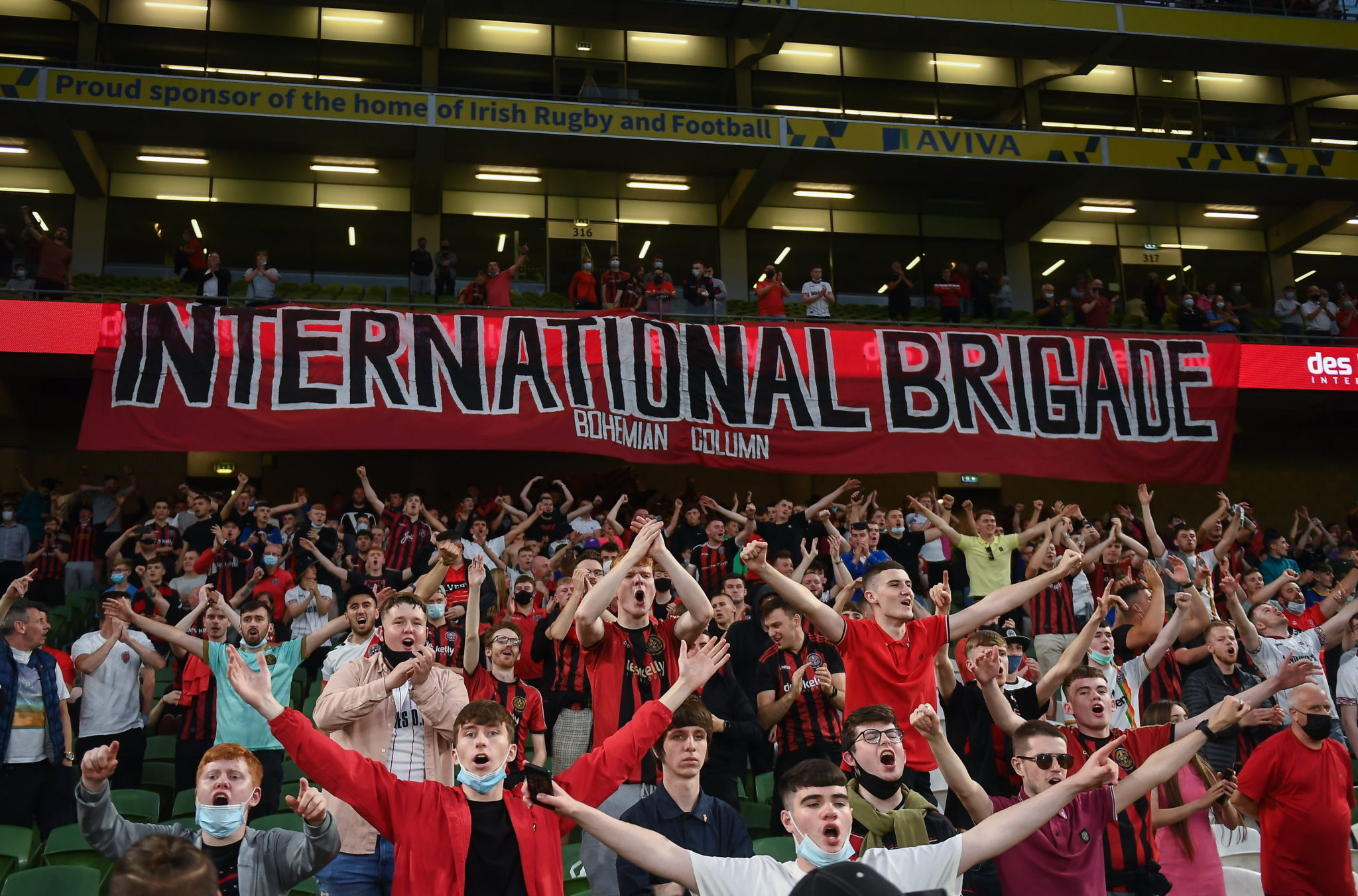 15 July 2021; Bohemians supporters celebrate after the UEFA Europa Conference League first qualifying round second leg match between Bohemians and Stjarnan at the Aviva Stadium in Dublin. Photo by Harry Murphy/Sportsfile

Crowds have been returning to League of Ireland and Women’s National League football in increasing numbers, over the last two months.

"I was one of those lucky enough to be present for the first round game between Bohs and Stjarnan and the atmosphere at the Aviva Stadium that night was fantastic," said Hill.

"It is great that the second round home game for Bohemian FC will also be played at the Aviva Stadium and we look forward to another great night and a further boost to our Return to Watch programme at the home of our senior Irish football team ahead of those big World Cup games at the stadium in September."

League of Ireland Director Mark Scanlon said: “This latest announcement is another step forward for our game as we edge back to normality and work with all our stakeholders on the return of supporters to our grounds in significant numbers.

"I again want to thank the Government and their agencies, the clubs and our own FAI staff for their hard work to date on this pilot scheme and look forward to another great European night in Dublin."

Ahead of the announcement on capacity and ticketing details tomorrow, the Bohemian FC Chief Operating Officer Daniel Lambert said: "I again want to thank the FAI and the Aviva Stadium for their help in making this fixture possible.

"The 6,000 in attendance for Bohemians v Stjarnan last Thursday created an atmosphere to remember - a night that will live long in the memory of supporters and players after an agonising 16 months apart and we look forward to more of the same on July 29th when we will again ask our fans to comply with all FAI protocols and Government guidelines on the safe return of spectators to Irish sport."