Former World Number One Andy Murray makes his return to singles tennis for the first time since January at the Cincinnati Masters this evening.

The 32-year-old Scot hasn't played at the level since breaking down in tears after losing a first-round match at the Australian Open at the beginning of the year.

Now ranked number 325 in the world, Murray underwent hip resurfacing surgery and has since played in doubles events.

He paired with Serena Williams in the Mixed Doubles at Wimbledon, where they reached the third round. In the Men's Doubles at SW19, he and his partner Pierre-Hugues Herbert lost in four sets in Round Two.

The three-time Grand Slam winner and 2012 Olympic champion Murray gained a wildcard entry to the ATP Masters 1000 tennis event in Ohio, with Roger Federer and Novak Djokovic also amongst the field.

Murray is expected on court at around 7 pm Irish time this evening against familiar opposition in Frenchman Rochard Gasquet.

Murray beat home favourite Gasquet in four sets in the quarter-finals of the 2016 French Open at Roland Garros. Murray went on to reach his only final at that tournament before losing to Djokovic in four sets.

If Murray beats Gasquet, he will face Austrian fourth seed Dominic Thiem in the second round. 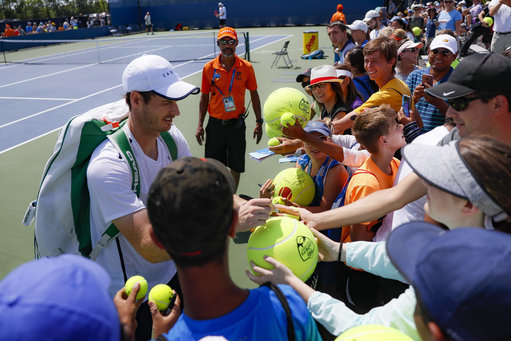 On January 11th of this year, an emotional Murray announced at a pre-Australian Open press conference that he would retire from professional tennis due to struggling physically for a "long time", particularly with his hip injury.

He said that he had been suffering from hip pain daily, and that it caused him to struggle with tasks like putting his shoes and socks on. He says now though that he needs to get back on court to improve his mobility.

"...At some stage, you have to take the step to try and play. The quickest way to get up to speed is by being on the practice and match court with top players", BBC Sport reported.

"I'm not expecting to move as well I used to, but I think I can move better than I am now," he said. "That will take some time since I only started playing singles a couple of weeks ago.

"When you're playing at the highest level against the best players, they hit the ball big and that takes some time to get used to."

Murray won his first doubles event back in action, alongside Feliciano Lopez at London's Queens Club in June.

Murray has also added tournaments in China in September and October to his schedule but has not yet committed to playing singles at the final major of the year, the US Open.

The action at Flushing Meadows in New York gets underway on August 26th.

Murray 'not sure' he deserves to make British Davis Cup team