Twenty-three-time Grand-Slam champion Serena Williams says she needed to "put the 'business bun' up and get to business" to defeat compatriot Alison Riske in a three-set tussle on Wimbledon's Centre Court, to book a place in the last four.

The 37-year-old said her hair was "just in my way" and said the final straw was missing a shot because it was blocking her face. The seven-time champion won the first set 6-4, but Riske brought the game to a deciding set by claiming the second 6-4.

Williams served up 19 aces throughout the match and won the third set 6-3, against the player ranked number 55 in the world who knocked out the women's top seed Ashleigh Barty in the fourth round.

Serena comes through an almighty test…

Speaking after her victory, Serena said, "I haven't had a tremendous amount of time to prepare for this. Like I said at the beginning of this tournament, each and every match, for me has to count for five or ten matches. 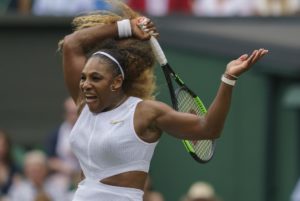 "I have not played a lot. Its the first time since Australia that I felt good. It's been a really, really long year for me already, and hard year, as I'm not typically injured. I don't know where I am, I know I feel good. And now that I feel good I can focus on training and technique and practice. Something I literally haven't been able to do a lot of.

"I just needed to fight. Alison, played so great throughout the tournament. She's beaten so many amazing players, players who have had great years. She was not giving it to me, I needed to step up and take it, and that's what I had to do.