Republic of Ireland international Rianna Jarrett has already begun proving why Women's Super League side Brighton have signed her up, after an impressive brace on her debut last week.

The Wexford native is in camp with Vera Pauw's Republic of Ireland squad ahead of a pair of vitally important EURO 2021 qualifiers over the next week.

Greece are the visitors to Tallaght Stadium tomorrow evening, before the Girls in Green travel to Montenegro for next Wednesday's away tie in Group I.

One player staking a large claim to be one of the first names on the team-sheet is Jarrett, and two goals on her debut for Brighton against Crystal Palace in the FA Cup last week will do no harm.

"I couldn't have asked for a better start to be honest. Firstly I was delighted to get the call to start the game - it was my first game since the cup final with Wexford Youths in November.

"Obviously as a striker going into every game you back yourself to score, but that doesn't necessarily mean it's going to happen. Thankfully it was within the first 15 or 20 minutes that we went 1-0 up, and for me personally I was delighted to get that goal, but I don't actually score that many goals outside the box!"

The decision to move cross-channel from Wexford Youths was one actively sought out by the 25-year-old striker, and she approached one of her international teammates for advice on how to make it happen.

"I just remember having a conversation with Louise Quinn... she had made the transition from the Women's National League to playing abroad so I was just kind of asking her questions as to how she went about it.

"I was already in the process of putting together a highlight video, it was just kind of clips of me playing with both Ireland and with Wexford.

"From there my agents put together a C.V. and they did all the groundwork in terms of talking to clubs."

That led to a trial at Brighton, slightly delayed by injuries, and ultimately a six-month professional contract offer that was simply too good to turn down.

The woman at the helm at Brighton is Hope Powell, a renowned figure in the women's game in England, having managed the national team from 1998 to 2013.

Jarrett says that made the decision to say yes to Brighton's offer even easier.

"To play under Hope... her experience as a player but also a manager is second to none. She's well equipped in the women's game." 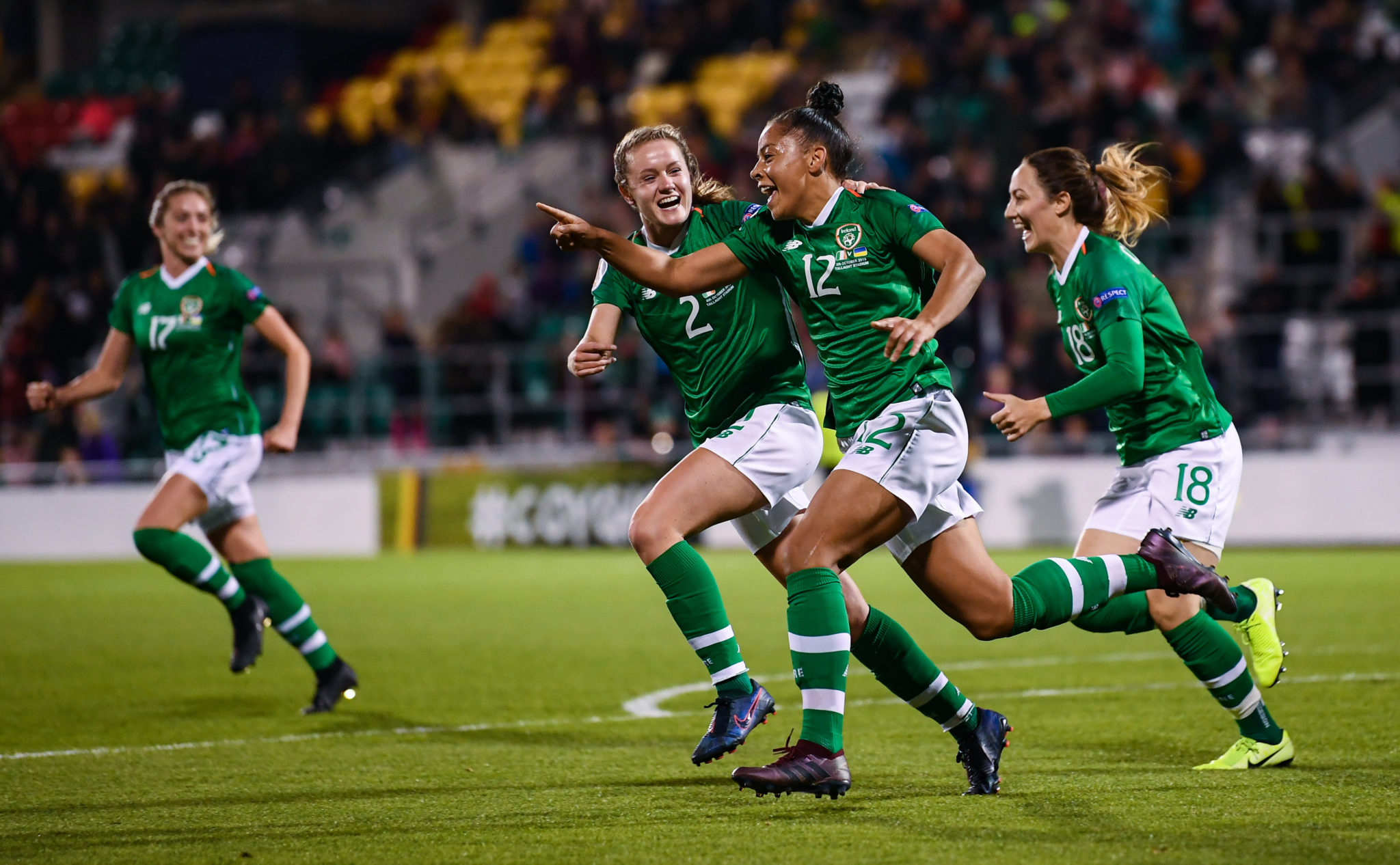 8 October 2019; Rianna Jarrett celebrates with Republic of Ireland team-mates, including Heather Payne, 2, after scoring her side's second goal during the UEFA Women's 2021 European Championships qualifier match between Republic of Ireland and Ukraine at Tallaght Stadium in Dublin. Photo by Stephen McCarthy/Sportsfile

Jarrett hasn't had an easy time with injuries, having suffered three cruciate problems before she turned 21. Ireland's fitness coach Dan Horan, who like Jarrett was based out of IT Carlow at the time, helped her through her latest period of recovery.

"Obviously any injury is difficult as a player, because all you want to do is play and train - I suppose when that's taken away from you you have to re-assess and look at different things.

"The three cruciate injuries meant I spent a long spell on the sidelines rather than being able to play or train. There was a spell in the last one where I did kind of struggle finding the motivation to keep going.

"It was kind of enjoyable going through it [the rehab] even though it was hard work and a lonely process."

Pauw's squad are looking to make history as the first Irish women's team to qualify for a major tournament, and Jarrett says they may not get a better opportunity than this campaign, where they have picked up seven points from nine available so far.

"The squad has players of all ages which is what you need, if you're good enough you're old enough. We do feel this is the best opportunity we've ever had to qualify in terms of the squad we have, in terms of the players we have available. But also in terms of the draw that we've got and the position we've put ourselves in from the first three games.

Make sure to turn up on Thursday @tallaghtstadium to support the team!

"It's important that we build on that and utilise that - ultimately we want to qualify for EURO 2021."

Dutchwoman Pauw is now six months in charge of the Irish team, and Jarrett, who scored in her first game in charge against Ukraine last October, says she has been a breath of fresh air at the helm.

"Each manager brings in different qualities and philosophies, and it's been great working with her so far. The first camp she was involved in was the Ukraine camp [in October 2019] and obviously because there are players based all over Europa and America it is difficult to get us in so the only contact we do have is when we get in camp and are preparing for a game.

You can still purchase tickets for Thursday night's qualifier against Greece here on the FAI website, with over 5000 tickets sold as of yesterday.