Celeste Raack is from Sydney, played for Tasmania, has a granny from Louth, and is hoping to represent Ireland at another T20 World Cup.

The 27-year-old legspinner from Merrion Cricket club made her Ireland international debut at the 2018 ICC Women's World Twenty20 against Pakistan and is hoping she can play her part in qualifying for the next one.

Unlike the 2018 edition, Ireland must go through the Europe Qualifier which takes place in Spain at the end of August.

"It's a really important tournament for us because we haven't had to play in a European qualifier for a few years," Raack told OTB Sports.

"Obviously not qualifying for the World Cup last year is why we find ourselves in that situation. We're hoping to really show what we can do and that we are ready for that next level.

"It'd be huge to qualify for the World Cup with this squad. We had four senior players retire at the end of that tournament in 2018. We've had a young squad coming through who are every bit as talented but it's just getting match experience and games into us which is something we're really excited about this season to be able to show what our young players can do."

Raack had yet to hit double figures age-wise when she first picked up the leather ball and admits that even in her mid-twenties, she is one of the elder lemons in the Irish squad.

There was one cricketer in the family, her Dad, who she says was more of a footballer but it was his interest in cricket that rubbed off more.

"I started quite young when I was about eight years old.  [Cricket] was quite big with girls in the area I grew up in, in Sydney, and Cricket Australia have done a lot of work to promote the sport [for girls].

"So, it wasn't that uncommon to be playing as a young girl where I grew up and it's grown even since then. There's a lot more playing now."

The popularity of the women's game Down Under was demonstrated in spectacular fashion when hosts Australia took on India in the Women’s Twenty20 World Cup final in March of 2020.

86,174 fans were in attendance to watch Australia beat India to win their fifth title at the Melbourne Cricket Ground and Raack points to a number of reasons as to why women's cricket is so popular there.

"In summer it's [Australia's] national sport. There's a lot of visibility for women's cricket, a lot of media following women's cricket and that's certainly grown in recent years.

"A lot of money has gone into it from Cricket Australia and the standard of cricket and the professionalism with women getting paid full-time, you can see if you've got a girl, there's a pathway to becoming a professional athlete and being paid almost as much as the men.

"It's probably something that lends itself toward people wanting to put themselves forward and take it up as a serious sport." 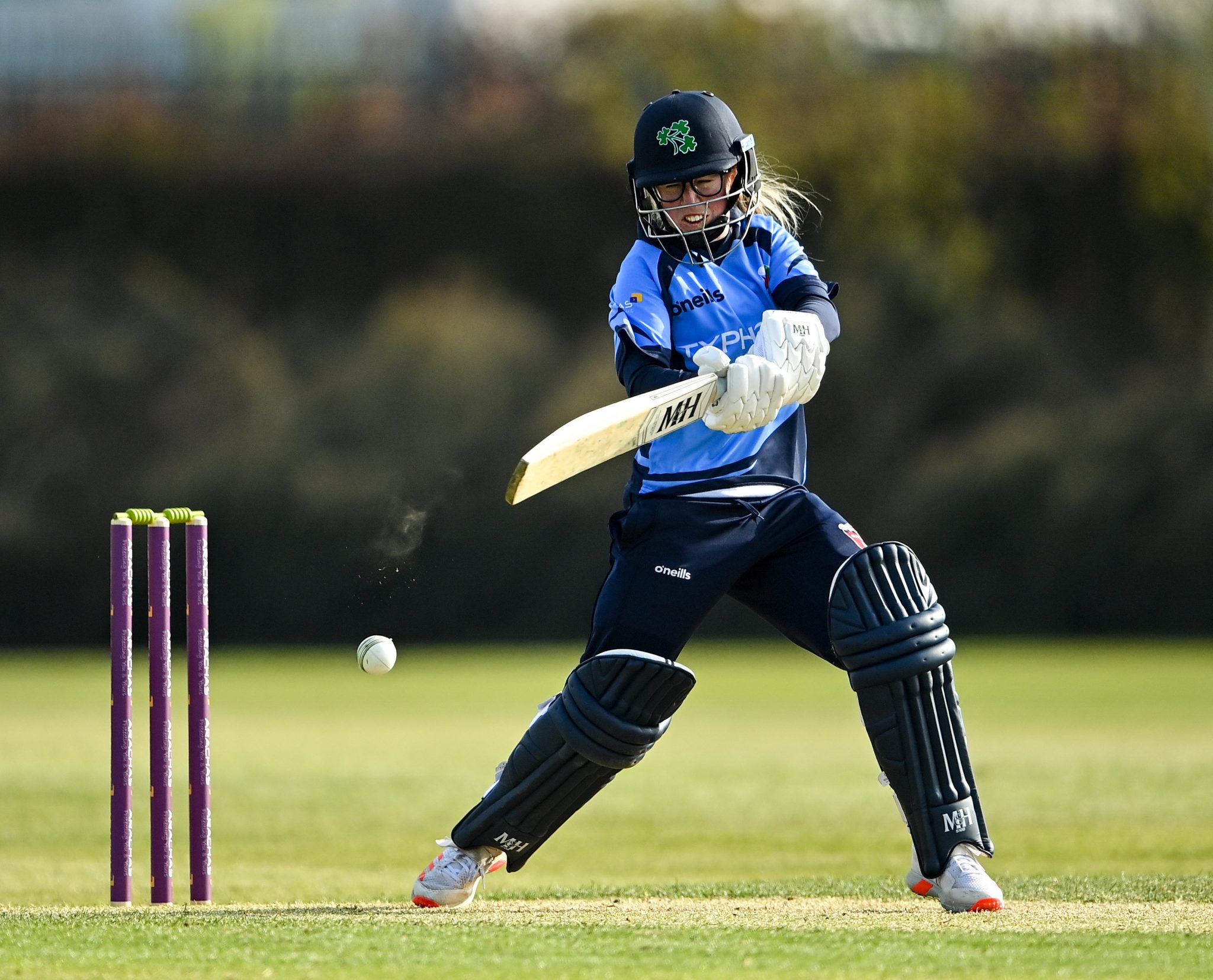 25 April 2021; Celeste Raack of Typhoons during the Arachas Super Series 2021 match between Scorchers and Typhoons at Pembroke Cricket Club in Dublin. Photo by Ramsey Cardy/Sportsfile

Raack points to the Australia squad that played in that record-breaking final as another reason why more young girls will take it up. All of them are household names and role models that the next generation is looking to emulate.

The financial reward is a huge incentive as well and while aspiring female batters or bowlers may not be able to earn the kind of money on these shores, the situation here is improving.

In May 2019 Cricket Ireland announced that for the first time it had signed up six female internationals on part-time contracts including Raack who was on the newest list of contracted players announced for this year and that expanded to seven players.

Raack was originally invited to play in Ireland by a woman whose family is steeped in the game here - Isobel Joyce (her brother Ed is the current women's head coach) - when they both played for Tasmania and after a summer playing here, she decided to stay.

There was one thing that she was struck by in relation to cricket culture in Ireland.

"That was the biggest surprise I got coming here. In Australia, cricket is a real sport for all and cuts across all sorts of social divides and locations and cultures whereas here I found it was [played] mainly in private schools.

"The game is working really hard to grow in areas where it hasn't traditionally been as popular. It's making inroads in those areas."

Raack and the rest of the Irish squad's next appearance is in Malahide and will be the last international action before the squad heads to Spain next month to compete in the ICC T20 World Cup European Qualifier.

The series against the Netherlands will be the second T20I series at home in 2021 for the Ireland Women's team after their 3-1 series win against Scotland in May at Stormont.