In the wake of Bryson DeChambeau's six-shot victory at the US Open, Europe's Ryder Cup captain Padraig Harrington doesn't think golf needs to worry about big hitters on the tour.

DeChambeau was the only player under-par at Winged Foot last weekend and debate has been sparked about the potential for changes to equipment in order to level the playing field for lesser hitters off the tee.

But speaking ahead of this week's Dubai Duty Free Irish Open, Harrington said it's up to players to compete with the longer hitters on the tour rather than radical changes to the game being needed.

"I don't see anything different," the three-time major winner told a press conference at Galgorm Castle.  "The leading players, the guys winning majors almost always have an advantage off the tee. It's nothing new, Bryson was long but he was seventh in driving distance so there's plenty of guys who've played that way in golf all their time.

"I'm sure Rory (McIlroy) hit as many drivers off tees as Bryson did last week. It's a big change in the mind of people but it's been there, if you haven't seen this coming then you've been blind.

"It's what Tiger (Woods) did, what Rory and DJ (Dustin Johnson) did, what Greg Norman did, it's what Jack Nicklaus did...to play this game you have to be great off the tee, it's always been that way.

"Building a course to compete with these guys, they've definitely gone down the road. If you want to build a golf course to suit straight hitters then you have to build one where they can hit 54 out of 54 fairways during the week.

"Last week (at the US Open) the straight hitters couldn't hit the fairways either so there's loads of different ways and intricacies, you'd probably be better off asking the players how to do it.

"Clearly firm, fast greens are the toughest thing, short rough obviously means you have to hit fairways in those situations. There's guys who aren't even close to being competitive golfers who have comfortably more club head speed than what you see on tour. 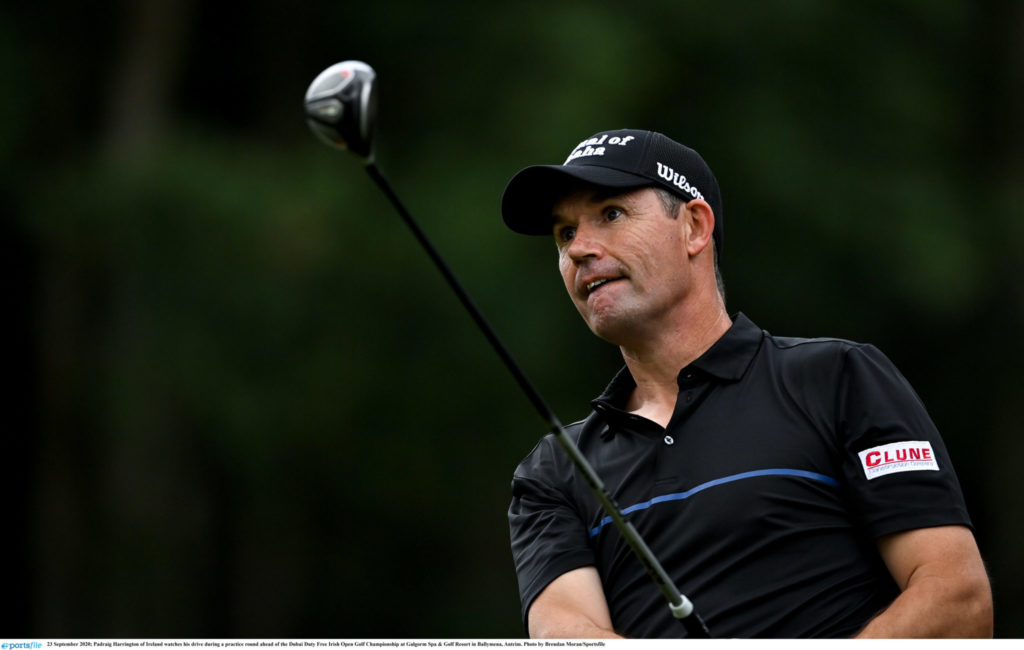 23 September 2020; Padraig Harrington of Ireland watches his drive during a practice round ahead of the Dubai Duty Free Irish Open Golf Championship at Galgorm Spa & Golf Resort in Ballymena, Antrim. Photo by Brendan Moran/Sportsfile

Harrington thinks it's clear that the next generation of players are likely to further push the limits in terms of distance from the tee.

"In ten years time they'll be a dime a dozen. The biggest hitters when I was an amateur were being told that they're doing something wrong and that's been the way until Rory in around 2010. Bryson will have changed the storyline now that there's nothing wrong with being a big hitter.

"I was talking to Paul Dunne and his friend has comfortably a 130 club-head speed, now he's not a golfer. The physicality of swinging a golf club at that speed is not that impressive, there's plenty of people who can do it in your regular golf club.

"Even if you dial back the club-head or the ball, they'll still be able to do it with a seven iron which is quite impressive. If you swing a seven iron at 100mph then there's not much rough that's going to hold you back.

"The game has become more physical...I saw a change with Tiger 20-years ago but I saw a huge change with Rory when he started dominating. If you don't move with the numbers, the likes of Bubba are dropping out of the club-head speed top 20 because there's so many new guys coming in with speed.

"Bryson, if we were to compare it to sprinting 100m, he's doing it in 12-seconds, so there's about another 20% left in the tank in terms of human capabilities for other players coming along. The big change will actually be in women's golf. You're going to get a woman playing well into the 170s ball-speed and she would be competitive on the men's tour."