The teenager becomes the youngest woman to reach that stage of the tournament since 1996, after seeing off Hungarian Timea Babos last night 6-2, 4-6, 6-4.

The match lasted almost two-and-a-half hours under lights at Louis Armstrong Stadium, and it means Gauff will next take on world number one Osaka on Saturday in what will likely be her first outing on the court at Arthur Ashe Stadium.

Gauff said on court after the match that it could have gone either way in the end.

"We were both just testing each other. I think if I didn't win that last point, then maybe she would have won. It was that kind of match."

Gauff went on to acknowledge the crowd, who were fully behind her throughout the match.

"I can't even see any empty seats! I'm super honored to be American and play in New York City... This is just the beginning, and I promise to always fight for you guys."

The crowd has spoken...

The second-round win matches Townsend's best ever Grand Slam singles result, having come through qualifying to reach the US Open main draw for the fifth time in her career to date.

Townsend now advances to play another Romanian in unseeded Sorana Cirstea, with a spot in her first-ever Round of 16 at a major on the line.

The Chicago native said confidence was key to her victory.

"I kind of went into qualifying on a mission. I'm doing this. I had my head down. I'm going to do this. I think... it always gives you a lot of confidence to be able to pull out three matches in a row and earn your spot in the main draw. Like nobody gave it to you. You earned your way there.

"I think that's a really satisfying feeling. Being able to have three matches versus other people playing their first match, you've kind of battled through things that they're just feeling. The first match of a Slam, stuff like that. It does give you a lot of confidence. I'm not saying I want to do it every Slam, but it's definitely nice to be able to have that accomplishment and to be able to pat myself on the back and say, 'You did that.'"

In the men's draw number two seed Rafa Nadal had a walkover, with Australian Thanasi Kokkinakis withdrawing before the match began with a right shoulder injury.

The three-time champion will play South Korea's Chung Hyeon in the next round. 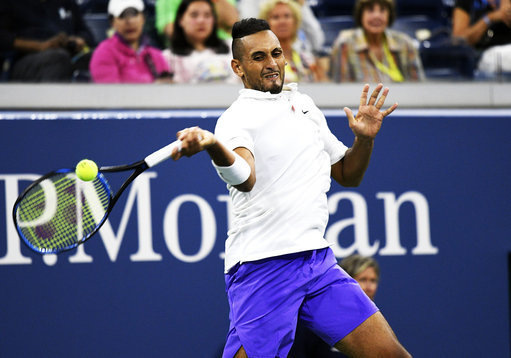 28th seed Nick Kyrgios had a routine 6-4 6-2 6-4 win over unseeded Frenchman Antoine Hoang. The Australian progresses to round three, the furthest point he has ever reached in the Flushing Meadows major.

He takes on the five-time champion Roger Federer in the third round.

Fellow Brit Johanna Konta will also attempt to reach the fourth round later when she plays China's Shuai Zhang.

Number 8 seed Serena Williams is also in action in the third round later today against Czech 23-year-old Karolína Muchová.