There have been two further coronavirus-related deaths and 299 new confirmed cases announced.

The rest are spread across 20 other counties. 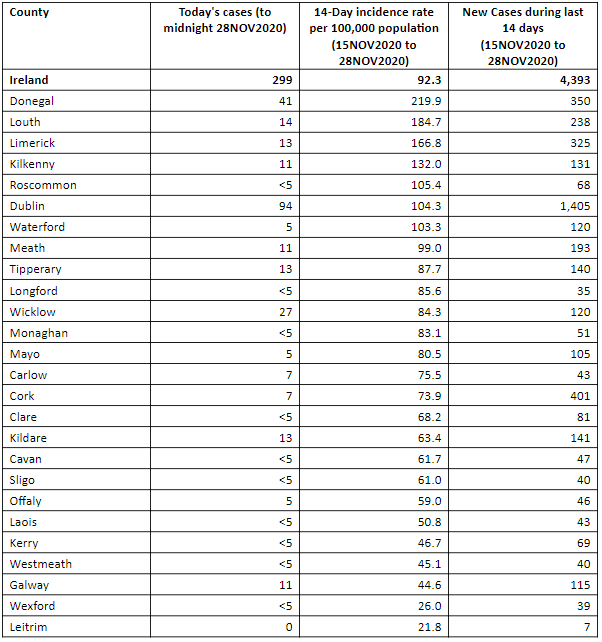 New coronavirus cases per 100,00 people over the past two weeks.

This afternoon, there were 257 COVID-19 patients in hospital, with 30 in intensive care.

It comes after the Health Minister Stephen Donnelly said coronavirus vaccines could be rolled out around the country “potentially early in the New Year.”

He said there are no plans to make vaccine mandatory, noting that his “strong preference with it is that it would be voluntary.”

The National Vaccine Taskforce is currently preparing for the nationwide rollout of the vaccine – and is due to submit its implementation plan to Government on Friday December 11th.

It is believed officials are aiming to have around one million people vaccinated by spring.

Meanwhile, the World Health Organisation spokesperson Dr Margaret Harris said plans to have the majority of the country vaccinated by the end of summer are highly ambitious.

“It would be good if it could be done in that time but don’t give your Government a hard time if it doesn’t happen,” she said. “It is the equivalent of a moon-shot.”